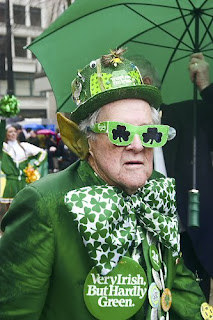 When Irish Eyes Are Smilin - chances are they've got their hand in your pocket.

I'm sorry, don't mean to piss on St. Paddy but, really, those two characters have become emblematic to me of, well,  Irishness.    And, before you assure me they're aberrations, American and Canadian, take a close gander at what the local gang who ruled Eire these past years actually did to their country and their countrymen.   Like Reagan and Mulroney, they were a pack of get rich quick morons.   It's because of leadership like theirs that Ireland's biggest export is once again its young people.

Remember the Celtic Tiger, Europe's answer to Dubai?   Well that tiger has now been butchered and is slow roasting on EU spits, the countryside littered with unfinished housing estates that await the arrival of the bulldozers.

The now ex-Irish government could have let their wastrel banks fail and protected the Irish public by guaranteeing deposits, but chose to pledge the good credit of rank and file Irish taxpayers by guaranteeing bank bondholders instead.   In other words, those rich bastards who took a flyer on high-risk/high yield gambles on these Irish banks got their bad bets paid in full and paid on the backs of the Irish public.   And the Irish have been conditioned for so many centuries to take it in the neck, they didn't march in the streets in rage but resigned themselves quietly to their fate and, if they were young and educated, scraped up airfare to get the hell out.  And the Irish thought the Potato Famine was bad.

Read more about the majesty of St. Patrick's Day here.

Email ThisBlogThis!Share to TwitterShare to FacebookShare to Pinterest
Labels: Ireland