The New York Times reports that a damaging Tsunami has struck Onahama City, sweeping away cars, trucks and buildings, following an 8.8 magnitude earthquake off the northeast coast of Japan.   This quake follows a 7.9 magnitude tremblor that hit the country yesterday.

A 10-metre Tsunami warning has been issued for most of the Pacific coast of the main island of Honshu.  Tokyo's Narita airport has been closed.

I stumbled upon this map today.   Wish I hadn't.   It's not a map of what is but of what could be, some say will be. 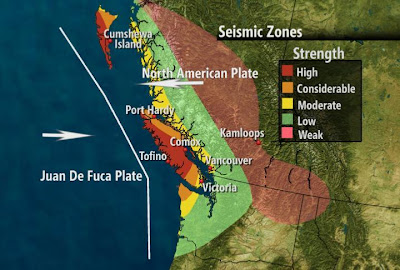 See that red band, the one that stretches from Tofino to Comox?  I happen to live within that red band only on the east side, thankfully, not the west.   If you look at the map below Tofino you'll see an appendix-like inlet that spans most of the width of the island.   That's the Alberni Inlet at the very end of which lies Port Alberni.  In March, 1964, an earthquake in Alaska triggered a Tsunami that swept the Alberni Inlet more than four hours later.   The waves pummeled Port Alberni (below) and other coastal towns on Vancouver Island.

Email ThisBlogThis!Share to TwitterShare to FacebookShare to Pinterest
Labels: Tsunami