Just What Have We Gotten Into? 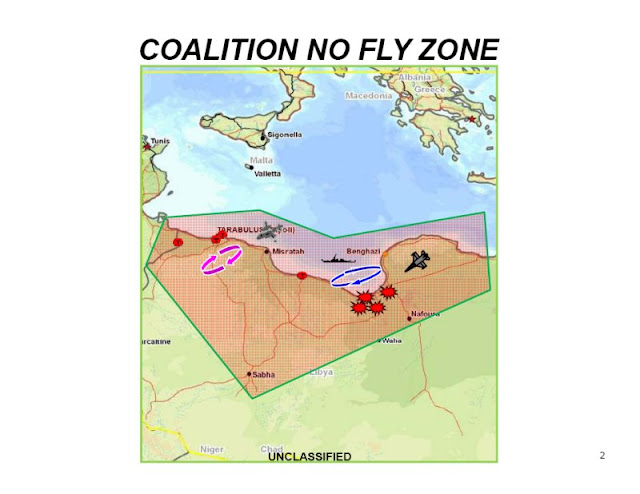 This Libya gig is making less sense with each passing day - and we're only getting started.   Once again it's the West saying, "Oh look, there's an open door.  We can push on that," only to discover it's a revolving door and you're stuck going around and around and around.

We're supposedly there to establish a "no fly zone."   Unfortunately that's a most inartful term of art.   It can mean just about anything you want it to mean.  It will accommodate most definitions even if it has to stretch a bit.   That's not a good thing when you've got a bunch of players who each think they're working from a different playbook.

The first sure sign of trouble showed up on N.F.Z. - Day 2 when it became apparent that "the boys" aren't really sure who is actually in charge of this rolling fiasco.

The Americans, who everyone is so accustomed to running these things, decided to step back and let someone else be in charge.   Clever move, Barack.  Full points.

Some figure this should be a NATO-operation.   Sort of like Kosovo or Afghanistan.  Nope, that ain't gonna fly.   Germany abstained at the UN Security Council and wants no part of it.  So, you've got a First Tier NATO partner saying "no."  Maybe the Germans learned something valuable from Afghanistan (just saying).  French president Sarkozy too isn't much interested in hitching up his military to a NATO wagon.   So, at least for the moment, NATO seems to be out of the deal and the day may soon arrive that we'll understand that's actually a good thing.

So, if the Americans are out and NATO is out, who's left?  Well, that'd be a gaggle of countries - Denmark, Italy, France, Britain, Canada and we hope, at some point, some Arab countries.   Only, if you were an Arab country, would you want to tie yourself to this dog's breakfast?

One enormous problem of having no consensus on leadership is that it makes it hard to reach consensus on just about anything else.   Really tricky questions like what is the mission?  How and when does this end?  What is the political staying power of the coalition partners?  Who ordered the chicken salad?   What in hell does this UNSC resolution actually mean?   This is not good.

Confusion reigns.  Some leaders openly avow that this is a "no fly zone" only mission.   There is no broader mission.   Then, as their heads turn away from the microphone, you can hear them mutter something about "Gaddafi has to go."

Well, if you want a permanent no fly zone, that's doable to some extent.  Bomb the living hell out of Gaddafi's airbases.  Take out his weapons bunkers, his towers and support buildings and, most importantly, flatten his aircraft shelters with his remaining strike fighters inside.  It's not like he'll be getting any more.  There, his air force is neutralized (as in "extinguished").   Maybe you also want to keep Muammar's tanks and artillery pieces from taking wing.   Fine, find them and extinguish them too.

Don't think for a minute that we're not handing Islamist radicals a lot of fodder for their propaganda mills.   The longer we loiter over Libya, the more convincing becomes their narrative.  Gaddafi, at the moment, likes to blame al Qaeda for the revolution but warfare, like politics, can make strange bedfellows.

Did we not think any of this through before we jumped into this mess?   If the bottom line is regime change, and we all know it is, why did we sign on to a UN Security Council resolution that falls far short of that?  If the real deal is ridding Libya of Gaddafi, why didn't we turn to the one army and air force that's easily capable of doing just that without triggering all the Crusader bullshit?

The way things stand, we've backed ourselves into a lose-lose proposition.  That's a fancy term for "stalemate" that is itself a preliminary term for "quagmire."  As Stephen Metz explains in The New Republic, Libya is shaping up to be an ideal site to host the next grand insurgency even if it's not clear as yet whether Gaddafi's forces will be the government or the insurgents.

History offers a number of sign posts that an insurgency will occur. Unfortunately Libya has almost all of them. At this point the political objectives of the government and anti-government forces are irreconcilable. Each side wants total victory—either Qaddafi will retain total power or he will be gone. Both sides are intensely devoted to their cause; passions are high. Both have thousands of men with military training, all imbued with a traditional warrior ethos which Qaddafi himself has stoked. The country is awash with arms. Libya has extensive hinterlands with little or no government control that could serve as insurgent bases. Neighboring states are likely to provide insurgent sanctuary whether deliberately—as an act of policy—or inadvertently because a government is unable to control its territory. North Africa has a long history of insurgency, from the anti-colonial wars of the nineteenth and twentieth centuries to more recent conflicts in Chad, Algeria, and Western Sahara. Where insurgency occurred in the past, it is more likely to occur in the future. All this means that there is no place on earth more likely to experience an insurgency in the next few years than Libya.


Which is where Egypt comes in to this discussion.   A month ago, I think to the day, I wrote a piece arguing that Egypt and only Egypt could put a quick and effective end to this nascent civil war.  If you're looking for an air force, Egypt has Mirage 2000s and no fewer than 240 F-16s.  That's an air force.   If you want ground forces, Egypt has brigades of American M-1A1 main battle tanks.  Egypt and Libya share a common border, they even share trans-border tribes.  Egypt has tribes it needs to secure against Gaddafi.   On the other side of Libya stands Tunisia which, like Egypt, has recently become ill-disposed to tyrants.  Muammar is suddenly the meat in a revolutionary sandwich.   And it's time the neighbours took a bite.

But we may not get Egypt and Tunisia to clean up the mess in their backyards even though the blowback from their reticence may come back to haunt them.  What that means is that we, Canada's leaders (whom, you might recall, stood up and joined together in a mighty "Hurrah" when Harpo raised the CF-18 thing) need to figure out how we're going to weasel our way back out of this just as we weaseled our way in.   This fiction of us being an honest broker, neither against Gaddafi nor for the rebels, has a very limited shelf life.

That Harper fell for this is a no-brainer.  After all he could never pass up an opportunity to put on his long pants and go to a splendid sit down dinner with the Big Boys.  How Ignatieff, Layton and Duceppe fell for it remains a genuine puzzle.  And of those Three Stooges, what does this say about Iggy, the Harvard schoolboy, who is supposed to know all about this shit?  To my thinking, not much.

Update:  In case you somehow think this post a little light on context, here's a little more from Reuters:

Some allies were now questioning whether a no-fly zone was necessary, given the damage already done by air strikes to Gaddafi's military capabilities, a NATO diplomat said.

"  Yesterday's meeting became a little bit emotional,"   the NATO envoy said, adding that France had argued that the coalition led by France, Britain and the United States should retain political control of the mission, with NATO providing operational support, including command-and-control capabilities.

"  Others are saying NATO should have command or no role at all and that it doesn't make sense for NATO to play a subsidiary role,"   the diplomat said.

Underlining the differences in the anti-Gaddafi coalition, Italy's Foreign Minister Franco Frattini said if agreement was not reached on a NATO command, Italy would resume control of the seven airbases it has made available to allied air forces.

A NATO role would require political support from all the 28 states. Turkish Prime Minister Tayyip Erdogan, whose country is a NATO member, said on Tuesday that the United Nations should be the umbrella for a solely humanitarian operation in Libya.

In a speech in parliament Erdogan said: "  Turkey will never ever be a side pointing weapons at the Libyan people."

There seems to be lot of similarities with Iraq. Bush invaded Iraq (besides non-existent WMD’s) because Saddam was killing his own people. Bush war resulted in the murder of 1 million are more Iraqi civilians. So his killing is good but Saddam’s killing was bad. Moreover, Iraq is a mess. 2 million Iraqis are refugees in neighbouring countries and millions in Iraq live in squalor with no running water and electricity. Also current Iraqi government is one of the most corrupt in the world.

In this case Gadhafi was killing his own people. So U.S and allies decided to kill some more as civilian deaths are being reported as a result of this invasion/no fly zone. Moreover there may be some truth to Al-Qaeda in the East. Last night a commentator on MSNBC confirmed that eastern Libya or Benghazi is sympathetic to Al-Qaeda like Yemen is. So U.S and allies are fighting a civil war on behalf of the rebels whose loyalties are of suspect nature. It is one hell of a mess.

If Islamist radicalism is finding a home in eastern Libya that's all the more reason for the Egyptians to get in there and put an end to this disaster as quickly as possible. Al Qaeda has already announced it is looking for a way to establish itself in Egypt.