BC Liberals Praise Coal and Ask All British Columbians to Feel Blessed. 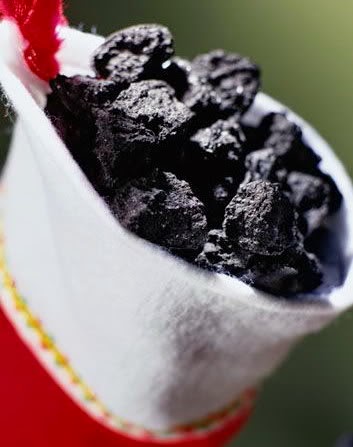 I guess it's the Christmas Spirit seen through the eyes of British Columbia's neo-Liberal government.  BC mines minister, Bill Bennett, issued a press release, "Stuff Your Stockings with BC Coal."


No matter whether you light the menorah, trim the tree or setup the Festivus Pole, your holiday activities likely have a connection to a lump of coal mined right here in British Columbia.
From the planes, trains and automobiles that are used to transport holiday gifts, to the stores where those gifts are sold - they all require steel. That steel is made using metallurgical coal. Upwards of 90% of the coal produced in British Columbia is metallurgical coal.
In 2013, B.C. exported more than 28 million tonnes of metallurgical coal. Planning to drive to the mall over the holidays? There are approximately three million cars in B.C. and it takes roughly 630 kilograms of metallurgical coal to produce a single vehicle.
Nothing says Canadian winter like lacing up the ice skates for a game of hockey. The steel blades that make breakaway goals possible start out as metallurgical coal. Coal production is a mainstay of the province's economy, generating billions of dollars in annual revenue and supporting thousands of well- paying jobs. Coal production currently represents over half of the total mineral production revenues in the province.

I guess Bennett never learned that coal in the stocking is for naughty kids.
Posted by The Mound of Sound at 10:38 AM

When Harper sold Canada to China with his FIPPA deal? It is said China owns a cluster of coal mines in BC's far north. China is to reopen their coal mines, near Tumbler Ridge. That had gone to court as BC miners were not permitted those jobs.

Bennett and ditzy Christy are out and out blatantly lying. Christy's 100,000 LNG jobs for BC people was another whopper of hers. The six figure wage for thousands BC mining jobs, is one more whopper. Everyone wants one of those jobs.

BC citizens have no reason to trust nor believe the BC Liberals. Therefore, they have some damned gall, asking the BC peoples support.

Methinks Owen is referring to how whacked out this Bill Bennett is. He is on steroids or something like that. He chastised the governor of Montana and a ton of Canadian civilians in BC. He has no wit but a very loud stupid mouth I used to live in his riding. Red Neck country where he fits in like a well worn glove. He is as phoney as phoney can be I went to his office in Cranbrook BC to interview him many times but he was "unavailable" always. Go figure. He brought Crissy hissy Clark to Fernie BC where I used to live and they went for a red neck picnic in the backwoods where the public and press was bared from attending now if that's not wacky what is?

Clark once in her little life goes to Fernie and the public are left in the dark of secrecy courtesy of red neck Bill?

And they don´t give a shiq since the wind blows to the east most of the time. What the hell class of people are they? Kick the Chinese out and Nationalize our resources... is only way out. This garbage is frigging depressing. Anyong.