Is Michigan the Most F_cked Up State in the Union? 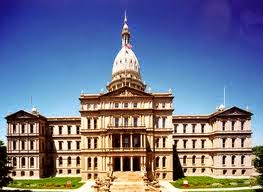 Ever since the conquest and occupation of the City of Detroit, the Michigan state government has done some pretty quirky things.

The Boys of Lansing wasted no time passing a union-busting, "right to work for less" labour law in 2012.

Last year the far Right legislature enacted a law that bans all insurance companies from covering abortion costs unless a woman's life is in danger. Women who want that sort of coverage are required to buy an extra rider.

Now working its way through the legislature is a controversial "religious freedom law" that critics claim will clear the way for denial of service to gays and other minorities.

“In many religions, it’s OK for a man to beat his wife,” Brooke Tucker, staff attorney at the ACLU of Michigan, told msnbc. “Based on language in this bill, all he has to say is my religion allows me to do this.”

If you still have any doubts about how unhinged Michigan's state legislature has become, look no further than a bill to amend its renewable energy act to allow the burning of old tires, industrial waste and used oil to be classified as "renewable energy."

Email ThisBlogThis!Share to TwitterShare to FacebookShare to Pinterest
Labels: Michigan

America's open move toward fundamentalist religion is now being put into practice. We'll be seeing alot more legislation with a religious agenda I think. Our dark age PM would like to do the same. America culturally is intellectually bankrupt.

I don't know, Anyong. They're certainly pursuing an ideological bent and they're doing it with a vengeance. It's part of the rise of illiberal democracy and the authoritarian, corporatist state.

There does seem to be an accommodation of fundamentalism these days, Pamela. I have no doubt that Harper would love to follow suit if he thought he could get away with it. We just haven't been sufficiently conditioned yet.