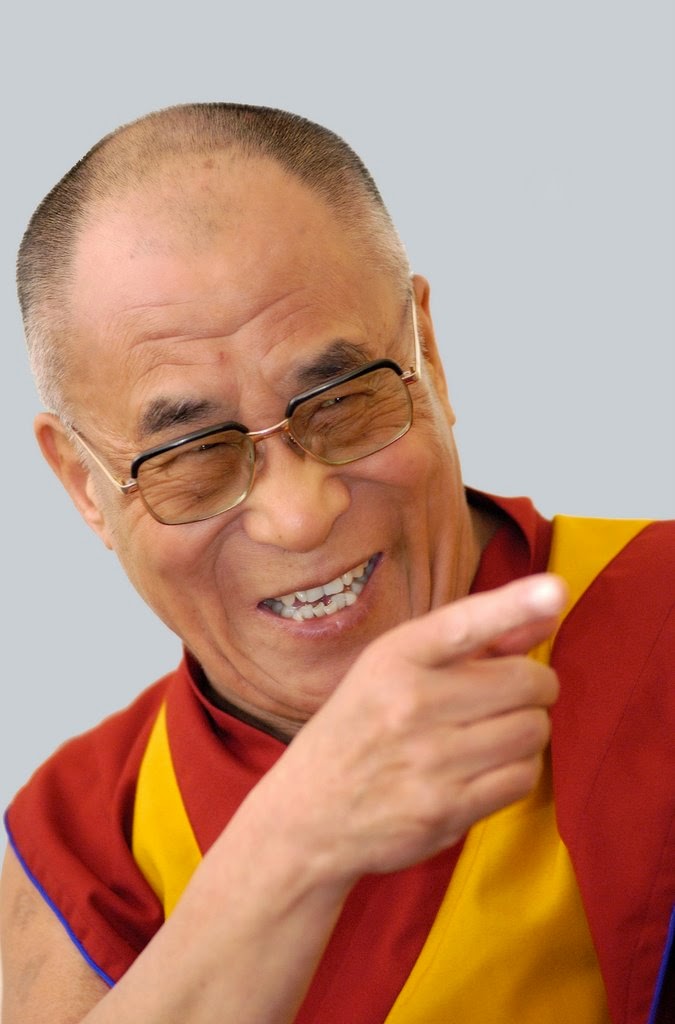 I don't get it.  The Dalai Lama thinks this might be a good time to abolish - the Dalai Lama.

In a wide-ranging interview, the 79-year-old Dalai Lama conceded that he may not have a successor.

"There is no guarantee that some stupid Dalai Lama won't come next, who will disgrace himself or herself. That would be very sad. So, much better that a centuries old tradition should cease at the time of a quite popular Dalai Lama."

The Dalai Lama has previously indicated he plans to hand his political responsibilities to an elected representative, saying in 2011 that such a move was in the best interests of the Tibetan people.

Maybe the Dalai of all Lamas is losing it.  The way it's supposed to go is that he dies and then is reincarnated in another body of his choosing.  That sets the High Lamas on a search to discover where he's gone.
To start the search, High Lamas may have a vision or a dream.  If  the previous Dalai Lama was cremated, they watch the direction of the smoke to indicate the direction of rebirth.
They often meditate at Lhamo La-Tso, central Tibet's holy lake, and wait for a vision or indication of the direction in which to search.  This relates to a belief that the female guardian spirit of the lake promised the first Dalai Lama that she would protect the reincarnation lineage.
When these visions have been followed up and a boy found, there are a series of tests to ensure that he is the rebirth.  There is a secret set of criteria against which the child is assessed.  In addition to this, the main test consists of presenting the boy with a number of items to see if he can select those which belonged to the previous Dalai Lama.
I'm not religious but I think the Dalai Lama is, like Pope Francis, a good guy and a force for good.  That said, is he admitting that this whole reincarnation business is a scam?  If he's the past, the current and the future Dalai Lama - all rolled into one - how can he see himself transforming into someone stupid or, gasp, a girl?
This is all too much for me.  Maybe he's just messing with our heads.

I met the Dalai Lama when I lived in New Mexico or for the Spanish speaking Nuevo Mexico he was down to earth and somewhat of a celebrity that I felt he did not like. People swooned and fawned over him and that gets old real fast. He was with his troop of monks who in my humble opinion were also very grounded. They compared themselves to the Native Americans and showed me how a straight line could be drawn through the earth. Just like the North and South Poles but would connect Tibet with the "Four Corners" where Utah Colorado New Mexico and Arizona meet. It was a spiritually significant place for the Native Americans long before the borders were drawn there by the Americans. If you ever have a chance visit but be nice respect what is there.

Visiting Monument Valley at the four corners, even writing this makes my spine tingle is a place like no other I've visited on earth. It is where literally the stars touch the ground. How is that possible you may ask go see for yourself you won't be disappointed. Be awake at midnight on a cloudless moonless night and you will see first hand.