Is the Militarization of Cops the Last Straw? 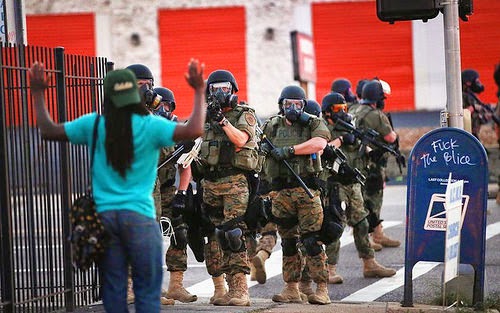 The line between law enforcement and the military is, sadly, blurring.  Today's cops are being equipped with combat weapons and gear, even armoured military vehicles.  They're being trained to operate in military formations - squads and platoons - and they're skilled in some aspects of counter-insurgency.

The bottom line is that this evidences a fracturing of the relationship between governments and their people.  For the public, this may be the last straw as a recent article by Johanna Mendelson Forman of the American University's School of International Service from The Globalist contends:


The appearance of armed personnel carriers, Humvees and other military equipment reveal to Americans – and the world – that U.S. cities are indeed the new war zones.

A key part of the problem is the pervasive access to heavy weaponry by local law enforcement after 9/11. Instead of focusing on community policing – getting closer to the people – law enforcement has actually distanced itself and “tooled up.”

It is scant comfort that local law enforcement agencies sell this as their approach to “homeland security.” Their weaponization – and indeed the militarization of civilian security, as their actions to “defend” themselves against protestors show – is a bridge too far.

...The brutal and violent use of excessive force to arrest Eric Garner, an unarmed citizen, in New York City was inhumane. The illegal chokehold that ultimately killed Garner despite his screams, “I cannot breathe,” reflect two trends that policy analysts have known for a long time.

First, U.S. cities are the newest zone of conflict. And second, this new type of urban warfare mentality has gone hand in hand with a greater tolerance by the U.S. legal system when it comes to holding police accountable for their actions.

Unless we are completely blind, we Americans must urgently realize one painful global reality: What we now see – and practice – at home is precisely the impunity which we Americans so frequently deride in places like Mexico.
There, we know that preservation of the rule of law is often the exception in cases of police corruption or complicity in murder.

But now the shoe is on the other foot: The failure of grand juries to indict policemen in both Ferguson, Missouri, and now in New York City all point to a dangerous conclusion: We Americans are now treating our policing activities as acts of war, and thus hold any offending acts committed in the pursuit of that broader goal to different standards than the civilian ones used to prosecute criminal acts.

Unfortunately, the urban wars of 2014 are not armed conflict as we know it. Instead, they are manifestations of ideological divides like the racism of the police in Missouri or in New York.

These actions are but a mirror that reflects the deeper divides that are rearing their heads all across the country. Whether it is a matter of color or class, all these actions, from Iguala to Ferguson to New York, send a powerful message of exclusion and hopelessness.

And, lest we want to blind ourselves, we must recognize that it is precisely this type of sentiment that lays the groundwork of unrest and instability in any political system.

,,,The result is a potentially dynamic international movement of citizens who have had enough of the status quo and are taking to the streets to make their voices heard.

The demonstrations yesterday in New York City and Washington, DC over the failure to indict police for acts of violence will only grow stronger – unless citizens regain a sense of legitimacy in our criminal justice system.

Of course this sort of thing could never happen in politically stable Canada, eh? That doesn't seem to be how the Canadian Forces see it.  They've even developed an urban warfare camouflage designed to best blend in with the urban setting in Vancouver, Toronto and Montreal.  I wonder if they'll add patches with the logos of Enbridge or Kinder Morgan?  Our friend, Lorne, from Politics and its Discontents has supplied a link to a very useful article from The Walrus.  It's a thought-provoking essay, especially in this era of the most secretive, authoritarian government in Canadian history.

Here is an article from AlterNet that also ponders how much more authoritarianism Americans can tolerate and the country's emerging, pro-authoritarian culture.

Press for truth's excellent documentary of the event of G20 show it absolutely is happening here: https://www.youtube.com/watch?v=zejD0UkMGGY

And don't expect the trend of police militarization to stop, politicians might be paying lip service to it but this is a coordinated effort amongst all of the NATO countries.

Hi, Richard. Yeah, I did a post on the Guardian story:

Hi Mound; what you describe is also addressed in this Walrus article:
http://thewalrus.ca/armed-and-dangerous/

Lorne, you're back! How was Cuba? I assume you steered clear of the fine rum. Now you get to enjoy what Cuba can't offer - snow.

Thanks for the link. I'll check it out.

The last straw? What will people swallow until they revolt MoS?

Mogs, I genuinely wish I knew the answer to the question you pose. I do have a sense that the forces of authoritarianism and corporatism won't restrain themselves until something erupts. They seem to recognize that themselves in their considerable efforts to militarize law enforcement and their preparations for crushing dissent and urban warfare. These are acts of war on democratic society but we're not recognizing that yet.

Nobody knows the answer to my question not even me. I was merely juxtaposing what if? Shit if I knew the answer I would be a Billionaire eh?