Caution. This May Make Your Jaw Drop. 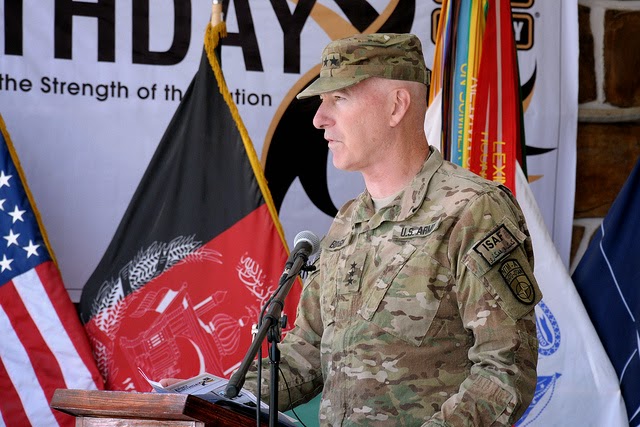 The book opens with this mea culpa:

"I am a United States Army general, and I lost the Global War on Terrorism," Lieutenant-General Daniel Bolger begins his history of the Iraq and Afghanistan wars. "It's like Alcoholics Anonymous; step one is admitting you have a problem. Well, I have a problem. So do my peers. And thanks to our problem, now all of America has a problem, to wit: two lost campaigns and a war gone awry."

By placing the blame on the military, Bolger portrays presidents George W Bush and Barack Obama as woefully misguided. The mission was impossible from the outset. Announcing the 2007 "surge" in response to a Sunni insurgency, president Bush said that the US wanted to turn Iraq into "a functioning democracy that polices its territory, upholds the rule of law, respects fundamental human liberties, and answers to its people." The trouble, Bolger explains, is that majority rule in Iraq meant permanent war: "The stark facts on the ground still sat there, oozing pus and bile. With Saddam gone, any voting would install a Shiite majority. The Sunni wouldn't run Iraq again. That, at the bottom, caused the insurgency. Absent the genocide of Sunni Arabs, it would keep it going."

Bolger prefers to fix most of the blame for the Iraqi and Afghan snafus on the military brass.  Others such as former commander now academic Andrew Bacevich put the fault at the feet of both the civilian and military leadership.

The judgment that those wars qualify as lost — loss defined as failing to achieve stated objectives — is surely correct. On that score, Bolger’s honesty is refreshing, even if his explanation for that failure falls short. In measured doses, self-flagellation cleanses and clarifies. But heaping all the blame on America’s generals lets too many others off the hook.

What's important is not who is right, Bolger or Bacevich, nor who is most to blame, the generals or the political leaders.  What is important is that Americans are finally having the conversation so long overdue, the post mortem of what went so horribly wrong without which they're bound to simply repeat failure again and again.

Canada also needs this sort of discussion, some post mortem of how our mission to Afghanistan was lost.  Who got us into the mess?  Who kept us in it long after we had said we would go?  What, if anything, did we do right?  What did we do wrong and whose call was it?

We won't get that overdue soul searching.  Among the reasons is that the military genius who hatched this harebrained scheme is long safely retired.  Another is that the political leader most responsible for prolonging our failed mission, the prime minister who squeezed every last drop of political capital out of the dead and broken bodies of our soldiers before turning his back on them, remains in power.
Posted by The Mound of Sound at 12:13 PM

I've seen it suggested that the real reason democracy became bound to be unworkable in Iraq was the US insistence that politics be done on a confessional basis. They did this because they absolutely didn't want politics to be done on an ideological basis--they'd have ended up with union-based parties, nationalist parties, people talking about issues of economic nationalism and who knows what.
To head this off they arranged for parties to be largely religious-based, as in Lebanon; as in Lebanon, this resulted in dysfunction and civil war. Still better for the US than the potential for Iraqis resisting in ways that threaten foreign economic control.

Most Americans involved probably don't even realize this is what they were doing.

An interesting theory, PLG, but I've not come across anything that would prove it. My recollection is that they reluctantly went with a Shia majority under Maliki because Grand Ayatollah Sistani scuppered their attempts to install a secular government under Chalabi.

I'm sure they would have been fine with a new dictator ruling along their preferences. But that unravelled early and isn't really relevant to how they did things once they reluctantly came to the conclusion that something like democracy was going to have to happen.
Thing is in the earlier stages, while Sunni were mostly driving the active insurgency, there wasn't any actual conflict between Sunni and Shia--the insurgency was directed solely against the invaders, and the Shia were making various noises along the lines of "We're being patient here, but if we don't get a voice sometimes soon we're gonna join the Sunni and throw your asses out", only expressed with more politeness and sophistication. Al Sistani and Moqtada al Sadr were jockeying for position but simultaneously running a good cop/bad cop on the Americans. It was fairly clear that if the Shia came in on the side of the Sunni rebels, things would get very bad very fast for the invaders, and the Americans might well prove unable to hold any territory in Iraq. At the same time, until the sectarian conflict got going there was also significant activity by non-sectarian groups such as fairly radical unions, particularly in the oil patch.

So they had to go with some kind of democracy, but the preference would be to de-fang it as much as possible. In the end, both on the military and political side, they went with the divide and rule approach, with sectarian-based political parties and setting off a sectarian civil war so that the locals could take care of their Sunni-rebel problem for them. This had unintended consequences and is still having them.