Is It Time to Nationalize Fossil Fuels? 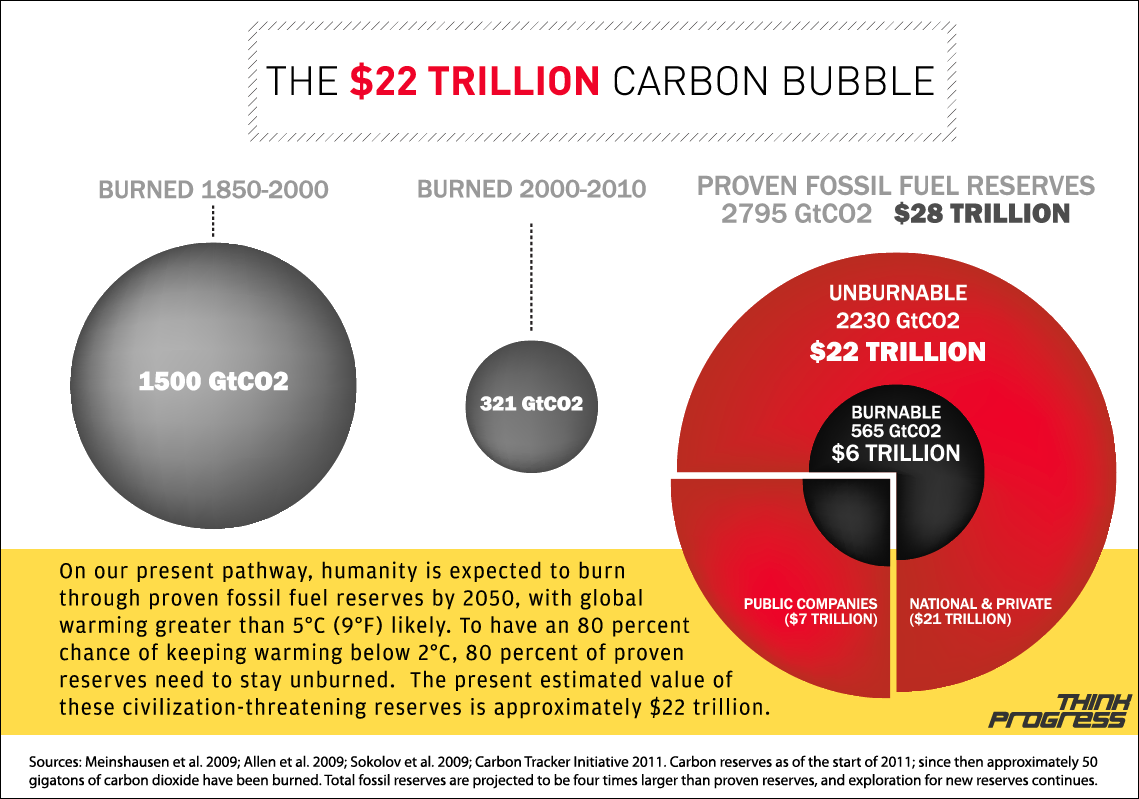 There are times when governments must intercede to protect their citizens against significant threats and dangers.

Fossil fuels present a significant threat and danger to life of all forms around the world.

We know if we are to have any reasonable prospect of limiting global warming to no more than 2 degrees Celsius, about 80 per cent,  perhaps even more, of known fossil fuel reserves must be left in the ground, untouched.  Forget about what might lie beneath the Arctic seabed or in other unexplored spots.

When known reserves exceed what we may safely burn on a 5:1 ratio, we're staring at a Carbon Bubble of truly giant proportions.  It's a "bubble" because those reserves are carried on fossil fuel company books at a notional market value that is heavily inflated.  The value of a coal seam that cannot be mined is about zero.  The value of a bitumen reserve that cannot be excavated is, likewise, zero.  Yet on stock markets around the world the Big Fossil companies that own these reserves are trading at share prices that bear no resemblance to their true "bubble" value.  There are trillions of dollars of fictitious wealth bouncing around our stock markets that are capable of inflicting massive economic disruption.

The Governor of the Bank of England, Mark Carney, knows there's a dangerous Carbon Bubble loose on the markets.  He admits it.  He said it.   And his voice is just one of many sounding the alarum.

Big Fossil, however, will have none of it.  Big Fossil, and the governments that feed off them, are in for the long haul.  They dismiss the entire notion of a Carbon Bubble and assure their shareholders that people will be burning their products forever.  They're backed up by the latest assessment of the International Energy Agency.  The IEA warning is dire.

Curiously, Big Fossil never says that we can plunder their reserves and still live. No, they don't seriously dispute the idea that consuming their wares will pretty much doom most of mankind to extinction.

So, it's sort of like some outfit building a fireworks plant next door and hiring chronic smokers for their workforce.  You got a problem.  An urgent problem.

Now, if you're the government this puts you in a spot.  You have to pick a side. You can either side with Big Fossil and say that those scientists, the lot of them, don't know what they're talking about and it's "Drill Baby, Drill - Burn Baby, Burn" or those scientists do know what they're talking about and we have to intervene to do what no energy company board of directors could consider doing - leaving their reserves in the ground.

There are, I suppose, plenty of ways to skin this cat.  Governments could declare that a carbon bubble genuinely exists.  They could decree that no more than 20 per cent of existing, known reserves can be extracted and consumed.  They could fix a target date for decarbonizing our societies and economies.  They could rescind subsidies to fossil energy producers and, instead, use those billions to accelerate renewable energy development and production.  As a last resort, governments could nationalize Big Fossil and wind it down.

These options all sound radical and they are but only until you remember the alternative - the fireworks factory next door.  In that context they're not nearly as radical as they might have first appeared.

We have to put Big Fossil out of business.  They won't do it themselves, they can't.  The directors and executives of a company are duty bound to maximize shareholder value and return.  They are not permitted to take their foot off the gas and hit the brakes.  That's simply not their job and so we have to do it for them.

Yes, such a move will cause considerable market upheaval but that will be momentary and minuscule in comparison to what will befall civilization if we do not act.

This is a protection issue, the very future of civilization at stake.  That puts it right up there with threats such as total war and nuclear winter only, on this one, we haven't got another half century to work our way through the madness.

While you're pondering the scary notion of shutting down Big Fossil, consider this.  A new study finds that, in the US, renewable energy is now fully cost competitive with fossil fuels.  Eliminate fossil fuel subsidies and use those billions to stimulate demand for wind and solar and it should be quite feasible to make the transition.

BC Hydro has 11,000 megawatts of clean, renewably hydro power.

BC Hydro is owned by the province of BC. Except for the part that was sold off in 2002.

Point well taken, Hugh. Yes BC Hydro might be a template for government provided renewable energy. Perhaps it is too important to be left to the vagaries of the free enterprise, market economy.

The harsh mistress of neo-liberalism presents herself as a mistress for everyone, fooling no one.

Can you imagine what this country would be like if Canada had accepted and continued with Trudeau's National Energy Program and Alberta had followed Lougheed's Tar Sands prescriptions?

Toby has a point. Trudeau and Lougheed -- even at loggerheads -- could see the future.

@ Toby - yes, I think that we would be a nation far less divided than we are today. Imagine had Alberta been spared the "boom & bust" cycles of recent decades, if growth had been managed and wealth preserved.

I think the focus should be on electric vehicle engines which are 85% efficient, compared to combustion engines which are 20% efficient. Fact is combustion engines consume most of the world's oil. So if we make the transition to electric transportation that will automatically kill unconventional oil like the tarsands and fracking (by causing the price to drop down to $20/barrel pre-carbon tax.)

This has to be done by legislation. (Allowing "market forces" to determine our fate is suicide.) I like the Quebec initiative which makes owners of big engine cars and trucks pay more. That's a step in the right direction.

@Hugh the BC Fiberals are bankrupting BC Hydro so they can give that cash cow away to their very rich friends. They will tell the voting public that it is no longer equitable to carry a utility loosing money, yet they made it so...

IPP's sell the power for more to BC Hydro than BC Hydro can resell it for, Lieberal Government orders go figure...

They also sold off BC rail a profitable crown corporation the BC liqueur distribution center to freinds with cash in their bank accounts. BC Hydro is next on their hit list of favoritism to the wealthy 1% of the populace...

Then next BC ferries..

No joking regarding the above. With NATIONALIZATION, THE PEOPLE OF A COUNTRY will not be left out. We must vote a government in that is for the country not for the already obscenely greedy wealthy. WW III has already begun. Anyong

@ Ron. Yes but we have to develop large-scale alternative energy to generate the electricity required and we have to have a top to bottom rebuilding of the grid.

I would like to see a truly national grid anchored in BC with feed-in points in every province heading east. BC, being a coastal western region has the benefits of abundant renewable energy of all descriptions - hydro-electric, geo-thermal, wind, tidal and oceanic current energy. The prairies could probably do better with solar. If we're looking for useful infrastructure investments that would be a great place to start.

Mogs, we really need a viable opposition party out here instead of our feeble default option. It's as though the NDP has consigned BC to one-party rule.

Anyong, you could be right.

The BC NDP are so bloody useless it makes me crazy. And this latest leader Horgan . . . I've never seen anything he said that indicated he stood for anything whatsoever. Makes the federal NDP look like a bunch of visionary revolutionaries.

Spot on, PLG. The B.C. NDP are indeed bloody useless. Yet there's no sign of any alternative opposition party filling the vacuum.