It's said to be a done deal, just the matter of a few centuries at the outside.  That's how long it's expected to take to melt all the great ice fields of the Earth.  The Arctic sea ice will disappear first, followed by the world's glaciers and then the Greenland ice sheet.  All the while the Antarctic ice sheet will continue to melt into the sea.

So, what's that going to look like say to the average Vancouverite?  Maybe something a lot like this: 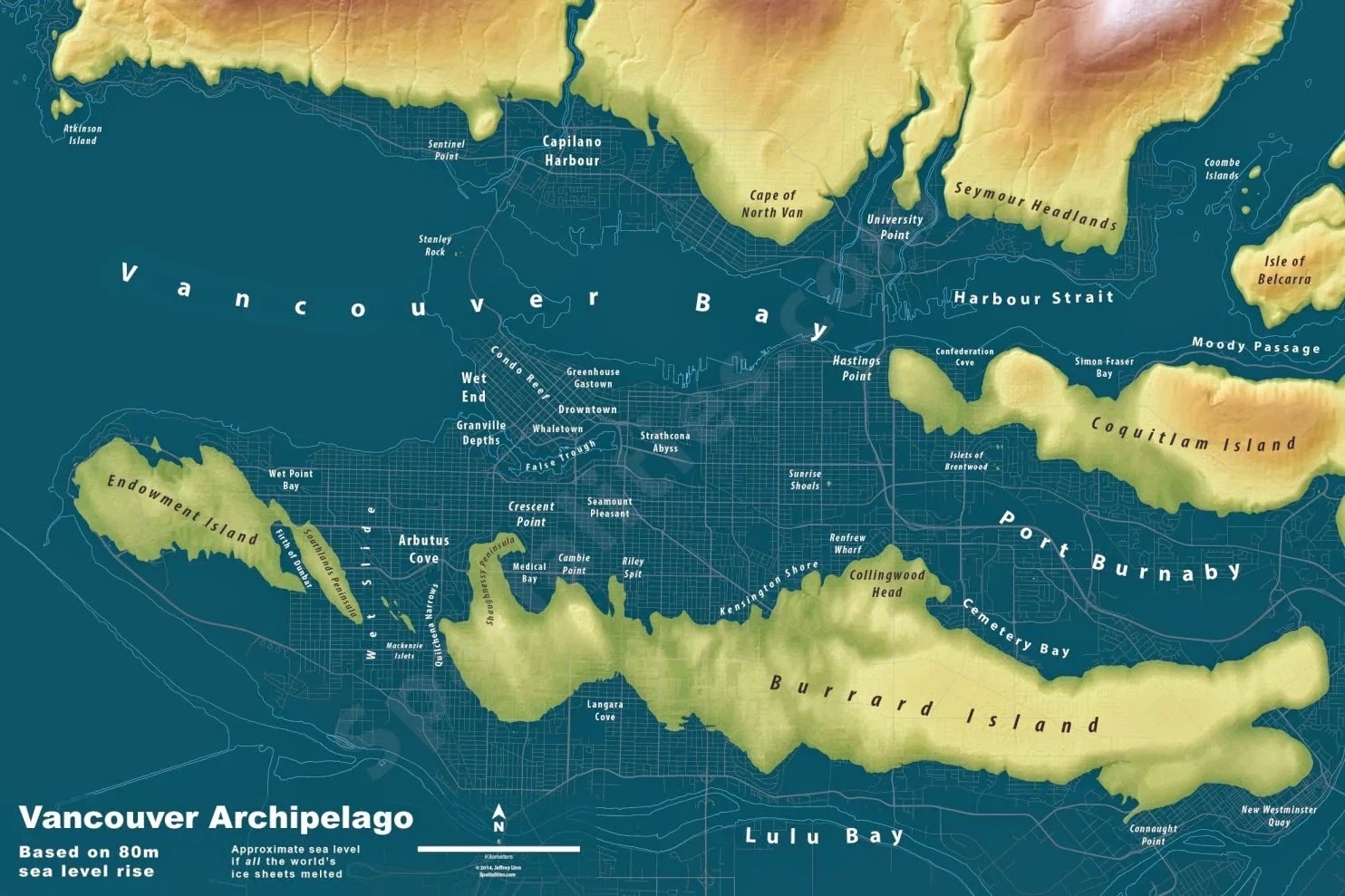 As we lose those ice sheets and glaciers we can expect sea level rise of about 80 metres, maybe more.  That would leave the Lower Mainland looking something like this.  The waterfront cities of North and West Vancouver, gone.  Stanley Park, ditto.  The superprime downtown area and the toney communities along what once was English Bay, Jericho and the north shore of the Fraser, completely submerged.   No need to dwell on already low-lying municipalities like Richmond, Delta and White Rock.  They would have been among the first to succumb, their populations evacuated presumably to high ground in the interior.

It's madness yet this is the path we are taking.  Madness.
Posted by The Mound of Sound at 5:47 AM

Parts of Louisiana are already under water:

Umm ya your predictions are spot on but coming sooner than you think...

Then there is this:

If we don't rid ourselves of the Harper juggernaut we are screwed.

You could be right about the timing, Mogs. Predictions in this area have regularly proved unduly optimistic. The Right routinely attacks the IPCC yet refuse to acknowledge its reports are seriously watered down.

I expect Greater Vancouver will be abandoned long before it gets to the point shown in this graphic. The residential areas are all facing inundation. My place sits atop a 40' high granite escarpment that should be enough to see me through my remaining years.

Hopefully MoS it won't happen in our life times because as a species we will smarten up and reverse the trend. The carbon cycle now being seriously overwhelmed due to us (we all)needs to be re-balanced.

The reality, Mogs, is that to deal with carbon we have to also deal with overpopulation and overconsumption. We're already consuming Earth's renewable resources at 1.5 times their replenishment rate. That means we're eating our seed corn, something that's visible to the naked eye from space.

Neo-classical, growth-based economics, may well destroy civilization faster than climate change. The establishment, represented by Harper, Abbott, Cameron and Congressional Republicans are shoring up this lethal mode of organization. Contemporary economics has become something of a mental illness.

We're going to have to find a way to keep the economy within the finite bounds of the environment and that means redressing inequality, not just within societies but among the nations of the world. Unfortunately our nature is to solve these problems militarily.

Then we have Premier ditzy Christy Clark, flooding the most valuable farmland in Canada for the site-c-dam. All in the name of disgusting greed, of the resource robber barons.

Then Harper sold Canada to Communist China, with his FIPPA deal. China has polluted much of their farmland and 40% of their water. Dead pigs come floating down China's rivers. 45,000 more Chinese were going to sue Harper, to get into Canada. That is stated in Harper's Omnibus Bill. Canadian tax payers are going to pay China's lawsuits.

China can no longer feed themselves and will be in Canada for, a minimum of 31 years. Harper has sold our resources and resource jobs to China. No doubt China will need our food crops as well.

MoS it is all as if I am living in a well scripted movie and can't get out because the weirdos have taken over the plot. Where to go where to go what to do what to do?

Grow a garden to feed your family buy solar [there is now solar siding as well as roofing and window material] and put up a new generation wind power generator [they can produce energy @ less than 5Km wind speed] if we starve the system by not participating it will wither and die...

It does sometimes feel like being on a runaway train, Mogs.

I was watching a documentary this week that focused on a professor from Oregon. He researches the Cascadia Fault, a subduction zone. His core samples have shown that, over the past 10,000 years this area has had Fukushima-grade megathrust earthquakes every 240 years. The last occurred 314-years ago. This reinforces the warnings from UBC seismologists that we're well overdue for the next Big One.

The provincial government encourages us to be "preppers" in a way. We've been told that pretty much all emergency resources will be occupied tending to the devastated west coast of the island, meaning we could be on our own for two, possibly three weeks. And so we've been given lists of supplies to keep at home, everything from adequate volumes of fresh water to first aid kits, spare batteries and loads of dried and tinned foods. I have a good variety of fishing gear and I visit the range three or more times a year to practice with my rifles. I've also put in a high-efficiency, stove-type fireplace and keep 2 cords of wood on hand.

As for the solar I am keeping an eye on that but there's little commercial interest in it my way, at least so far.

I've toyed with the idea of developing small, off-grid 'resorts' up the coast with micro-hydro, solar and wind generation. Who knows?

MoS you are on the right track keep going you can't lose even if the big quake/tsunami or financial meltdown does not hit in our life times.

Otherwise our grandchildren are stuck with it...