Harper Races to Abbott's Aid in Australia's Moment of Need 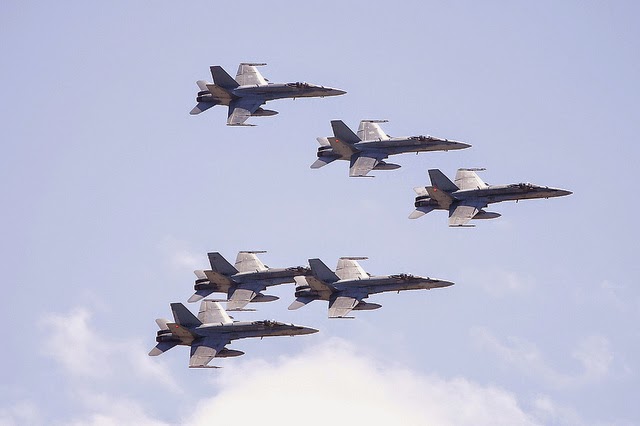 Stephen Harper has pledged that "Australia will not stand alone" as he revealed that Canada's six remaining CF-18 fighters have been dispatched to an airbase "down under" from where they'll begin bombing strikes against ISIS targets in Sydney tomorrow.

Even though the hostage incident ended with Australian police storming the cafe and shooting the gunman, Harper said it's important the cafe be leveled as a warning to Islamic extremists and environmentalists around the world.  He promised reconstruction aid to establish a Tim Horton's in its place.

Harper said while mosques will remain "more or less off-limits" a team of Canadian special forces is already scouring Sydney to identify targets such as fallafel stands or halal butcher shops for future airstrikes.

Canada's bombing mission to Australia is expected to last no more than six months but Harper said he won't be tied down by deadlines.

Harper angrily denied that the deployment will leave Canadian airspace undefended, saying that Canadian sovereignty will be protected by the United States Air Force, "just like they've been doing all along, ya ninny."

The prime minister has also dispatched foreign affairs minister, John Baird, and several dozen aides to tour the devastation.  For his part, minister Baird said he's heard the after hours scene in Sydney is simply amazing.

Is this for real?

Seriously? Really? No. No it's not.

But Stevie's showing how little he has by going back to the dry "terrorism " well. Today's poll showed that it worked for a couple of weeks until Canadians figured out that Harper was lying , again.

"For his part, minister Baird said he's heard the after hours scene in Sydney is simply amazing."

Accuracy in reporting please,Mound. Baird is reported to have said that the after hours scene in Sydney is 'simply fabulous'.

.. the dark satire is well deserved.. and apropos, Mound
Perhaps Calandra can coordinate pizza delivery Down Under.. along with Harper's imaginary F35's

This Harper Government stretches credibility far far beyond the breaking point.. One can choose any Minister on essentially any file and come up astounded that mainstream media has not hammered Harper.

And what of 'leveraging Laureen' how is that going? And why not leverage Ray Novak? Get an opinion from Arthur Hamilton? Pr Jenni Byrne. Beg for more 5$ donations from 'the base'.. forgive Nigel Wright.. as if he isn't currently running our Canada Pension Fund investment in military arms for his good buddy Stevie Harper

Do Canadians even have a tiny inkling of how screwed up Harper, his PMO, the little piggy MP's, the Harper Senate, the RCMP, the spy services are ? ?

Its a case of Truth is Stranger then Fiction.. and certainly more Evangelical.. did I hear a Baird spokeswank bray about 'Israel's robust democracy' ?

Of course, Mound, the clearest indication that this was truly a terrorist-driven attack worthy of international condemnation is the fact that the business section was closed down during the hostage-taking. Is nothing sacred to those heathens?

Thanks, MoS. I enjoyed this.

No MoS you got it wrong Harper is gonna bomb any Canadian that likes Offspring... he he he

I am the first target.

Oh now my solar panels and wind turbine and they took away my mountain bike. Now how I going to survive? Thanks MoS for giving me away. As someone that actually loves the environment but hates Harper. Now I am number one on enemy of Harper list. Oh my.

The first anon is mine. So...I can continue laughing. I did get it the first time Mound. Anyong