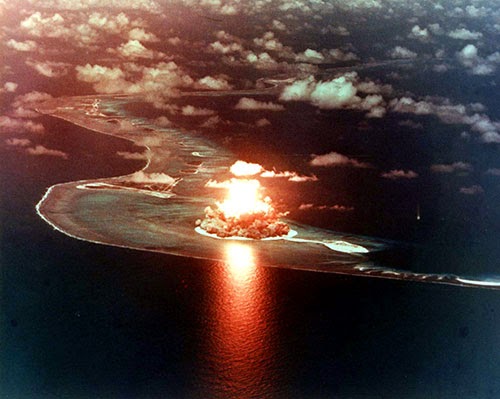 You might remember it from a photo like this (there are several).  It's Enewetak Atoll in the Marshall Islands where, from 1948 until 1958, the United States detonated scores of nuclear weapons.

By any standards that's a lot of nukes and nukes leave a lot of debris and fallout, really dangerous stuff.  Now sea level rise is threatening to spread the contamination.


THERE is no consistent air service to the coral atoll of Enewetak in the Marshall Islands, where the United States tested 67 nuclear weapons between 1946 and 1958. On my first trip to the capital, Majuro, in 2010, to study the danger posed there by the rising ocean, I managed to get on a special flight taking dignitaries to Enewetak for the dedication of a school. From there, I boarded a small boat to visit a nuclear waste dump that the world had all but forgotten.
The Marshall Islands are only about six feet above sea level. Its survival and that of other island nations are on the minds of negotiators gathering this week in Lima, Peru, for a United Nations climate change conference.
This place stands out for its misfortunes: ravaged first by radioactivity from tests conducted after World War II and, now, by the rising seas that threaten to swallow it.
When the boat reached a tiny island called Runit, we jumped out, crossed a narrow beach and walked through some shrub brush. A concrete dome about 350 feet across loomed ahead. I saw no signs, fences or guards. My guide walked up the shallow incline of the dome and stood on its top; impulsively I followed him. I wished I had brought a Geiger counter.
The United States had chosen this string of islands halfway between Hawaii and Australia for its nuclear tests; specifically the atolls of Bikini and Enewetak.
Bikini was so radioactive that there was little hope of allowing its displaced population ever to return home. But the military studied how to clean up Enewetak so that at least some land could become habitable again. The Defense Department concluded that there was so much soil contaminated with cesium-137 and strontium-90 that the safest approach was to leave it alone and let it decay naturally. Both have half-lives of about 30 years.
But also left behind by the blasts was plutonium-239, which has a half-life of 24,000 years. With enough plutonium-239 in the right form, a bomb could be made. That is why the United States participated in a $150 million operation, completed in 2012, to secure and clean up the plutonium at a Soviet-era nuclear test site in Kazakhstan.
At Enewetak, the United States decided in the late 1970s to dump as much plutonium-contaminated soil as it could gather into a 33-foot-deep crater on Runit that had been carved out in 1958 by a bomb roughly the size of the one detonated over Hiroshima.
...In addition to the contaminated soil, crews filled 437 plastic bags with plutonium chunks they had picked up from the ground, left behind when one bomb misfired. These also went into the crater, which was then covered with an 18-inch-thick concrete cap.
...Plutonium isotopes recently discovered in the South China Sea have been traced to the Marshall Islands, some 2,800 miles away.
An inspection last year found that the dome was deteriorating, and the radioactive groundwater below rises and falls with the tides. Storms wash sand onto the dome; vines grow in the cracks.
As things now stand, the Runit dome is likely to be submerged by rising seas or torn apart by storms, releasing its radioactive poison into the ocean and compounding the legacy our advanced civilization has left to this tiny island nation.
Posted by The Mound of Sound at 11:59 AM

Will we see a switch to thorium? Or will the war mongers make sure that uranium continues to be the principal nuclear fuel?