Time for a New Approach to ISIS? 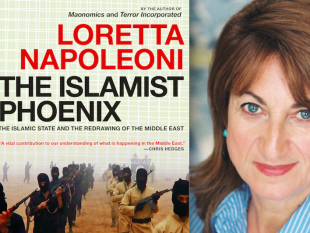 When the Islamic State overran most of Sunni Iraq, the West invoked the default option - air strikes.  We decided that a good course of therapy with precision-guided, thousand pound bombs was just what the doctor ordered.  Like loyal gang members we lined up for the chance to turn rubble into ever smaller rubble. The US, naturally, was big dog backed up by France, Britain, Australia, Canada and just about everyone else who happened to have a few warplanes sitting around doing nothing particularly useful.

We've been dropping lots of bombs on a rapidly dwindling inventory of targets but ISIS is still there.  This leads terrorism expert Loretta Napoleoni to ask if maybe talking would be more effective than bombing.

The Islamic State, rather ingeniously, lured the U.S. into a fight when it released the video of James Foley's beheading, writer and terrorism expert Loretta Napoleoni explains in a telephone interview. The author's new book, The Islamist Phoenix: The Islamic State and the Redrawing of the Middle East, is a concise reality check about  a group that is unlike any the world has seen before. In fact, according to Napoleoni, it is not even an "armed organization any more. It is a state, a modern, pragmatic state, a wholly different phenomenon from Al Qaeda or the PLO."

Organized states have always had a problem with guerrilla warfare. To name just three of the more famous examples, think Rome and the northern and eastern frontiers, Charlemagne's continuing fights with the northern tribes, and China's need to build a huge bloody wall because they couldn't keep the hordes at bay. Nothing new under the sun yet far too many of our so-called leaders fail to learn from history.

This is a bit different than guerrilla warfare, Cujo. It's more structured and organized. Much of new war engages a state actor versus a melange of guerrillas, insurgents, militias, criminal gangs and other state actors. It creates a degree of fluidity in which the conventional force may face an array of adversaries that readily change and morph. These "others" may unite against a common foe or on short notice turn on each other.

Combined with man made global pollution, and the shiq economy which only benefits the wealthy, we are in for a terrible time. I am talking about the young babies and my grand children I see every day, already facing difficulties. Here in Mexico it is already bad. The rich want to control the massses for their benefit so has been suggested to me coming from Mexicans. Anyong

Well, Anyong, the conditions are definitely worsening that will eventually destabilize even our western countries if not reversed. We're on a self-destructive path. Whether it leads to reformation or anarchy, something is coming.

Frankly I'm not convinced that what's happening has to do with a change in the nature of non-state actors, making them more dangerous or whatever. I think it's more that the effect of neoliberal globalization, particularly in the exploited periphery, is a weakening of state actors as they pull back from so many of the functions that used to make up the fabric of society. This weakened society, this moral and in some cases also physical power vacuum, makes it easier for violent groups of various sorts to grab some of that vacated room.
In the wealthy centre they can (so far) compensate with police state tactics from subtle to overt, but elsewhere the capacity for that doesn't exist, whether because they don't have the money or because the profit-as-only-God approach of neoliberalism has created corruption too deep for institutions to function, as is the case in Iraq and increasingly Mexico, among others. Hence the situation where the Iraqi army barely exists because officers are entrepreneurs, their capital being bribes to gain command posts and their return on investment being the difference between their budget and the amount they actually spend on men and equipment. When our institutions corrode that far, our countries will fall apart too. The Harpercons are doing their best to move things in that direction.

Globalization is weakening some states and in certain cases it's enough to tip them into failed state status. There are various forces in play that are destabilizing already wobbly governments. The Syrian civil war, for example, is widely thought to have been sparked by severe drought and food shortages. Bread riots likewise played a significant role in the unrest in Tunisia and Egypt.