What Message Are We Sending? 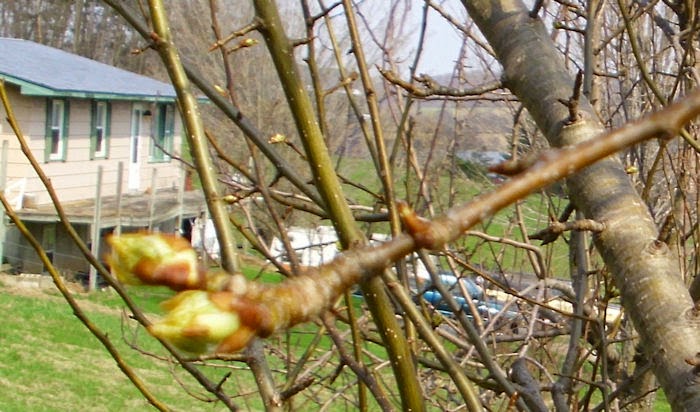 I spoke to my brother last night.  He lives in a smallish city west of Toronto. The conversation turned to weather.  Brother mentioned it was just below freezing out his way but only a couple of days earlier it had been about 70F.

In Celsius, that's a 22-degree fluctuation in just a couple of days - in winter!  I found that a bit alarming but he's experienced that sort of thing before.  It doesn't happen all that often but enough that he takes it in stride.

As I listened I began to wonder what message are we sending - to the plants, the crops?  What message are we sending to the insects and other pests that beset those crops?  They've evolved over decades, generations, centuries matched to a predictable climate - in Ontario, a genuine, 4-season climate.  Hearts, diamonds, clubs, spades - you get your hot summers, your glorious falls, your sometimes punishing winters and your messy springs.  Now the deck is being shuffled.

You're not getting winter in the summer but you are getting periods of summer in the winter.  Warm weather is a trigger for germination, budding, the beginning of the growth cycle.  Like any life cycle, the beginning is fragile, vulnerable.  What happens if the temperature climbs enough to hit that switch only to plunge into deep freeze again days later?

I'm no agronomist.  I don't even have much interest in plants but I can't imagine this sort of temperature fluctuation does any good for your orchards, berry crops or vineyards.
Posted by The Mound of Sound at 9:35 AM

Live in SW Ontario, I think it was a couple of springs ago where we got a prolonged hot spell early that forced the buds out followed by freezing temperatures that almost decimated the apple crop.
I remember one valentines day it was a balmy 17 when usually it's -20.
Last years polar vortex killed my ivy back to the ground and I lost 12 years growth. The great lakes are almost back up to their traditional level after more than 10 years of decline.
The trees look pitiful from repeated ice storms. Broken and bare with limbs that still litter the countryside.
How anyone can deny that the climates not changing is beyond me.

What troubles me is the possible cumulative effect of these fluctuating extreme winter weather conditions. Given that ecology is so inter-dependent, what would be the impacts of one group of species lost on all the others?