An Ungovernable World for the 21st Century 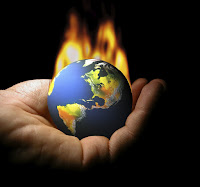 I've heard this before from some of the world's top experts in war studies. Now it's James Hansen's turn. The renowned climate scientist is warning that climate change impacts could render all or big parts of the world ungovernable.


Time is running out to transition to renewable energy, Hansen said, yet the most “relevant” people in power aren’t aware of the situation’s gravity. “Even people who go around saying, ‘We have a planet in peril,’ don’t get it. Until we’re aware of our future, we can’t deal with it.”

Mass species extinction, extreme weather events, dry spells and fires are climate change impacts which are happening now. A warmer atmosphere and warmer oceans can lead to stronger storms, he explained. Superstorm Sandy, for example, remained a hurricane all the way up the Eastern seaboard to New York because Atlantic waters were abnormally warm.

“Amplifying impacts” and feedback loops will accelerate the changes, according to Hansen. “It will happen faster than you think,” he said. If major coastal cities become “dysfunctional” because of sea level rise, as he believes is possible, the global economy could be in peril of collapse.

We've long ignored the enormous vulnerabilities embedded within our globalized economy. Things don't have to go down where you live to send you reeling. Everything is interconnected. Supply chains for distribution of resources and components, delivery routes for outsourced production and more are dependent on an unbroken line of stable, governable nations. There are groups today, non-state actors, preparing to exploit those vulnerabilities. Climate change may get there first.

While we're on the topic of the perils of climate change, how's this for a bummer? Scientists are finding giant, prehistoric viruses coming back to life in the melting Arctic permafrost.

French scientists announced this week that working in the lab, they have found a “giant virus” in a 30,000-year-old sample of permafrost from Siberia.

It is the second giant virus isolated from the same permafrost sample in two years. The team found each one by infecting Acanthamoeba, a common contemporary protozoan, with viral material from the sample.

“That fact that two different viruses retain their infectivity in prehistorical permafrost layers should be of concern in a context of global warming,” the scientists wrote in a paper published in the Proceedings of the National Academy of Sciences.
Shit, oh dear.

This is disturbing news. I prescribe a sunny afternoon.

" . . . the most “relevant” people in power aren’t aware of the situation’s gravity."

Oh, I think they are. They are gambling that they can hang on while the rest of us flounder. What I think they forget is the guillotine.

This reminds me increasingly of Vonnegut's Cat's Cradle. It doesn't finish well.

@ Danneau - hubris/nemesis, greed and stupidity, all underlie the premise that intelligent life is self-extinguishing.

My theory is that we launched on this path in the immediate post-war era when we underwent a powerful change that we labeled "progress." Moderating influences such as prudence and posterity were thrown straight out the window. We did things because we could without regard to whether we should. Now we reap the whirlwind.