Come October 20th, I Know What I'll Be Doing 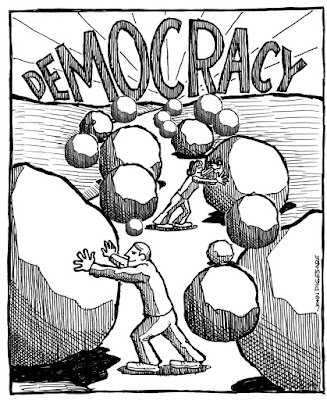 When I created this blog many years ago I dedicated it to the "restoration of progressive democracy." I chose the term "progressive" quite deliberately, knowing that it has a genuine meaning. It's more than "to the left of that other guy," the context in which it has come to be popularly known today.

At its heart, progressivism focuses on the eternal struggle between labour and capital. It recognizes that in a true, liberal democracy, government must regulate this struggle to ensure; for the benefit of the nation, its people and its commerce; that labour remains superior to capital. This is how nations achieve greatness.

Don't take it from me. Take it from Teddy Roosevelt and, before him, Abraham Lincoln.  Read it with your own eyes. The basic precepts are clearly spelled out in Roosevelt's "Square Deal" speech delivered at Osawatomie, Kansas in the summer of 1910.

Read it, absorb it, and then tell me you'll be content with a Mulcair government or a Trudeau government should either man prevail over Harper next month.

One fundamental tenet of progressivism is equality of opportunity to ensure that all individuals have access to the means to make of themselves as much as they possibly can.  Among those "means" are education, health care and a free and open society.

Progressivism recognizes that corporatism leads to cartels that in advancing their own ends thwart the very "means" progressivism seeks to nurture. One example is Canada's corporate media cartel.  A healthy, progressive, liberal democracy must have an informed public. The cornerstone of that is a truly free press. The hallmark of a free press is how it is owned. In order to ensure a free press in service to the public it is necessary that the media be owned in such a way as to offer the public access to information from many voices and the broadest possible range of opinion from far Left to far Right and everything in between.

Those objectives are defeated when, through concentration of ownership and cross-ownership, media outlets fall into the control of increasingly fewer owners, invariably powerful corporations. You know it's happening when newsrooms are hollowed out or closed altogether. That's when you begin hearing just one or two voices, all that are required to disseminate the corporate message.  Information and opinion blur, facts are spun, the public is left confused or misled. A misinformed public cannot vote freely and that's the purpose of corporate media. That's how media voices go from being the watch dog of government and transform into government's lap dog. Theirs is a powerfully symbiotic relationship in which the only losers are you and me and the generations to follow ours.

Do you hear the opposition parties promising to break up this powerful instrument of neoliberalism, corporatism, that so besets our democratic freedom? I don't. The Greens have a policy to restore a free press to Canada but, let's face it, they're a few years away from coming to power.

This is why I refer to today's political leadership as grey suits stuffed with wet cardboard. This blanket of neoliberalism that took hold of our country from the era of Thatcher, Reagan and Mulroney has smothered political vision in our nation. Our once moderately broad political spectrum has shriveled up, atrophied. Today everybody wants to be "centrist" even though the political centre, the nation's keel, has moved well to the right from what was just a few decades ago. This migration has not occurred accidentally. It has been steered (perhaps even herded) by globalization and free market fundamentalism.

The shift from liberal democracy to illiberal democracy isn't some seismic event. It occurs gradually, incrementally. You may have a sense of it but you don't feel it - until it's too late by which time it is a fait accompli. In an illiberal democracy you still get to vote only your vote becomes increasingly irrelevant. What is a vote if the person casting it has been misled or confused? The value in that vote and the power associated with it transfers to the agent who sows deception and confusion, the puppeteer who pulls the strings even as the ballot is cast.  A free press makes that corruption far more difficult but we don't have one of those any longer and nobody is suggesting we shall in the future.

We are gradually distanced from our government. It knows more and more about us and we know less and less about it.  Secret government is, even at its best, the harbinger of illiberal democracy. Secrecy shifts the balance of power from citizen to the state. It undermines the public's constitutional protections and freedoms. Once that curtain of secrecy is raised, government is free to do all manner of things. That's the reason it was created and raised in the first place. It has no other purpose.

The failure of Barack Obama began in his decision not to prosecute officials of the former regime for their crimes. When he did that he fettered many of the prohibitions America needed to prevent a recurrence of those past excesses. He has done some wonderful things but Obama has not dismembered America's imperial presidency. He has not even restored the crown jewel of Magna Carta, habeus corpus.

I have no confidence that, no matter how well intentioned, either Mulcair or Trudeau will pay more than lip service to progressivism should they form our next government. Progressivism is one of those things that's not bequeathed to the public. It is something that is achieved through demanding it, forcing the hands of those who have no interest in yielding to it.

Progressivism is about the future. It is about leaving a better, more responsive government for our children. It is about rehabilitating social cohesion and pushing back the forces of inequality. It is about restoring liberal democracy to its rightful place. This is going to be a difficult century for our grandkids and they shouldn't have to fight alone to break the shackles of neoliberalism and illiberal democracy.

Although the Square Deal speech is a century old, these are not fanciful but quaint notions. These principles are how we restore progressive democracy, true liberal democracy, to our nation.  Read it. Use it as I do to recalibrate your political and moral compass. See how much will remain to be done when you rise on the morning of October 20.

Mound If only we had men of vision, men of heart, men of principle rather than the pygmies that populate our politics. May certainly shows promise, not so the other three. Too bad she isn't a Lib.
I think the New Deal speech was in Dallas in 1905, the New Nationalism speech was in 1910 in Kansas. Both were and are inspirational.

I have to confess, Mound, that the closer we come to the election, the more discouraged and disaffected I feel; there is certainly little to inspire in this campaign, no grand ideas, merely tinkering around the edges, a bleak confirmation of your thesis here.

I find I am losing heart, because the enablers of the ills you articulate are the people themselves. We do not have a healthy and dynamic democracy because of their disinterest and their obsession with only themselves and their concerns. And the latest poll showing the Conservatives edging ahead confirms my fears - Canadians know so little and care to know so little that a modest surplus, however nefariously gained and ultimately meaningless, is moving them to reconsider Harper.

The cancer is well advanced, Mound. And nobody seems to care.

@ Norm. I could be wrong but I always associated the New Deal speech with Franklin Roosevelt not Teddy and I thought it was from the 30s. I do agree that both speeches were enormously inspirational just as I share your view that today we lack leadership of either Roosevelt's stature. I think the last visionary leader we had was Pierre Trudeau and there's been slim pickings ever since.

@ Lorne. It's important not to succumb to despair. Those who reject what has befallen our nation and our government need to speak out against it at every opportunity. Once steeped in the tenets of progressivism the arguments literally make themselves. Speak out. That's what we have to do. There are plenty of people who are ready to be reached. They share our frustration. A lot of them simply avoid the political process out of frustration for they see nothing acceptable on offer. We need to engage those people and every other open mind we come across. That's what I try to do in my writing and when I meet with people. It's amazing how receptive people often become once they're engaged.

@ Owen. I care, you care, Lorne cares so does Anyong. We have to turn this around and that means building a progressive movement much along the lines of the American experience in the early decades of the last century. Speak, write, build.

A couple of decades ago, it became clear to me that there was no party that represented what I perceived to be a political direction that would lead us to a just, caring and sustainable society. I don't like anything I've heard from the overall program of any political party, but there are encouraging bits here and there. Besides, I run on outrage and a sense of lost opportunity. Hanging my eyeballs on this area of the bloggosphere is a mixed blessing, reassuring in that there clearly are people who know and care, devastating in that the reach seems so small. Too bad about the mass of distracted populace; it just means that there's that much more educating to do. No accident that Norm and Owen are commenting here. Sad that there aren't more folks and wider=ranging discussions.

I totally agree, Danneau. As we drift along in the creation of our own, made-in-Canada "precariat" the fallout of that is becoming evident. People who live cheque to cheque are economically and politically disempowered. To them discussions such as these are frivolous and unwelcome. That said they're like a mass of little fuzes just waiting for a spark.

Goverment makes us greater than the sum of our parts

Anyong said: 8:36 AM. Mound, this is almost what my daughter said just about an hour ago when I pressed her as to voting. She is much aware of the "precariat" and said she will not vote due to the fact there isn't anyone to vote for. I am at a loss for words.

Anyong, has your daughter spent any time looking at each party's platform? I find it hard to believe that she can't find some party to support, especially my own. That said, if she can't support any party at least she can vote ABC to get rid of Harper.