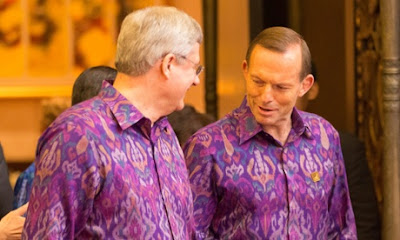 Tony Abbott has been ousted.

It's Abbott out, Malcolm Turnbull in after his caucus voted 54-44 to remove the unpopular prime minister.

"Ultimately, the prime minister has not been capable of providing the economic leadership our nation needs," Turnbull told reporters at parliament house ahead of the vote. "We need a different style of leadership."

Abbott pledged to fight the challenge but was ultimately unsuccessful in overcoming the "destabilization" that he said had been taking place within the party over months.

He walked stony faced out of the party room following the vote and did not speak to reporters.

Abbott ousted Turnbull as leader of the Liberal Party in 2009 although Turnbull has consistently been seen as a preferred prime minister. However, Turnbull's support for a carbon trading scheme, gay marriage, and an Australian republic have made him unpopular with his party's right wing.

Anyong said: And what is laughable about this event is, the fact Harper is hiring Abbot's go to man. Now what is Harper gona do?