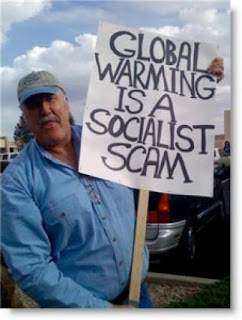 The influential Associated Press style book is rewriting the rules for writing about climate change deniers.

Among other things they're no longer to be called "skeptics" because that demeans real skeptics.

Scientists who consider themselves real skeptics – who debunk mysticism, ESP and other pseudoscience, such as those who are part of the Center for Skeptical Inquiry – complain that non-scientists who reject mainstream climate science have usurped the phrase skeptic. They say they aren’t skeptics because “proper skepticism promotes scientific inquiry, critical investigation and the use of reason in examining controversial and extraordinary claims.” That group prefers the phrase “climate change deniers” for those who reject accepted global warming data and theory. But those who reject climate science say the phrase denier has the pejorative ring of Holocaust denier so The Associated Press prefers climate change doubter or someone who rejects mainstream science.

At least AP hasn't ruled out "moron."
Posted by The Mound of Sound at 1:24 PM

I believe it's spelled 'moran'.

Actually, though I obviously disagree with the moron holding the sign, the scientists are not really correct in the matter concerning the word skeptic. It is modern rationalism and science that has usurped the word, or at least attempted to narrow its meaning. The original Greek meaning of the word referred to a contention that real knowledge couldn't exist, so scientists are really the guilty party here concerning etymology. Further pursuant to that many post enlightenment philosophers (and even pre-enlightenment ones like, say, Montaigne) would use the word skeptic in a broader way. And in keeping with this tradition many contemporary philosophers (particularly Continental ones) would insist that skepticism must also apply to the very notion of rationality itself. (None of this, however, suggests that the idiot above is not an idiot.)