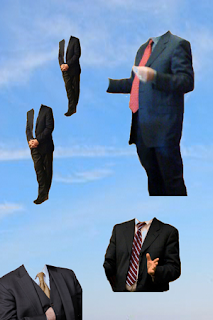 Many, many times I've described the leaders of our three mainstream parties as grey suits stuffed with wet cardboard. Nothing that has happened in the course of this election has left me any less convinced than I ever was.

You know what I'd like to hear? I'd like to hear someone talk about restoring the historical balance between labour and capital. I'd be happy to hear one of these jokers talk about the "precariat", a contagion that's spreading up from the south. All it takes is a shove these days and the little people fall straight through the cracks. How about a quick chat about what can be done to make Canadian cities liveable, affordable for our young people. That would be nice. I'll bet we'd all like to hear that.

Let's talk about the environment. No, not carbon taxes. Sure they're necessary but that's a band-aid response and nothing more. How is our already aging and decaying infrastructure going to cope with the climate stresses of the next twenty, thirty years? It's going to take decades to deal with this so it's not really something we can just kick down the road any more. Where are we most vulnerable? You don't know? Why the fuck not? What do we need to do or start doing now so that the Canada our grandkids inherit is no worse than it absolutely has to be? Or are you content to leave them to their fate lest that impede your personal political ambitions?

How about a discussion of inequality. Why don't we talk about where that comes from, how it's anchored in our economy? Let's talk about how little of it is merit or market based and how much of it is legislated. Let's talk about how wealth is created from tax exemptions and deferrals, from tax avoidance and tax evasion, from all manner of grants and subsidies and the generous provision of what belongs to every Canadian, our natural capital, either for free or for far below anything that could be called fair market value. Let's talk about how that forms the foundation for what is really a "trickle up" economy where wealth is sucked out of the nation, processed through the engine of corporatism and finally served up on a platter as investment income for the rentier class. Let's talk about how that is a massive, unearned, redistribution of wealth that couldn't flow so smoothly without the assistance of the same people now asking for our votes.

But I guess we can't talk about those things because the plebs are too fucking dim to understand them and it would only get them upset. Besides, if we don't talk about them now there's a damned good chance we won't have to talk about them later.  As for all those grandkids, they're not voting anyway - are they?

Anyong said.....Mound...this blog includes all the issues that ought to be discussed but alas, your suggestions are far to much for those who are running to govern this country and their level of intellect. The Conservative, Liberal and NDP leaders are moved by haggling over triviality. About a month ago, I sent a letter to the local paper regarding the "precariat" predicament that is not being addressed in this country at all. Being accosted by a so-called intellect who wanted to know what this word "precariat" really means was about the limit of my endurance. It is at present painful to express anything regarding this problematic and idiotic election campaign. That no doubt is the intent. Have a good day.

A concise few paragraphs that sums it up exactly, Mound. We are being fed pablum when what we need is real sustenance!

This, of course, brings up the memory of our briefly tenured prime minister, Kim Campbell, who volunteered that an election campaign is no place for discussions of serious issues. The only difference between Campbell and today's crop of contenders is that they know better than to say such things.

Yet once they have our votes counted and safely locked up they have no incentive to have these conversations either and so they don't. The essence of liberal democracy is leadership by consent of the governed. But there is no consent except for informed consent. A vote, a ballot cast, without informed choice is a connivance at best by the pol who can most effectively play to our fears, often to our darkest instincts. That's how you herd cattle into an abattoir. When they don't have to seek our informed consent that leaves them with ample wiggle room to serve interests other than our own. That is the nature of illiberal democracy - you get to vote, it doesn't matter. The 'political capture' inherent in neoliberalism takes over again once the Governor General is finished swearing everybody in.

I was thinking the other day about one of the reasons the consortium debates are all but dead, Mound. As I recall, the last one included videotaped questions from citizens, citizens who weren't afraid to bring up issues that weren't being discussed by any of the leaders. Your post,. with its litany of unspoken topics, demonstrates why this is the last kind of debate Harper and the others (excepting Elizabeth May) would want to engage in.

The discussion, by the 3 parties, about the economy and the middle class is now mind numbing. Here the NDP and Libs are sitting on information rarely available in an election, a PM who has abused the power of his office, over and over again. A PM who is dismantling our democracy. A PM who operates in secrecy. A PM who lies and lies and lies. A PM who does not freely let Canadians attend his campaign stops. What more do they need? Harper and his track record is a walking advertisement for incompetency, stealth, corruption and contempt. Canadians embrace much more then the economy. I see with both the NDP and Libs a central strategy devised to focus on the economy and to speak about it over and over again and at the same time discrediting Harper for his failure and lies about the economy. That's fine, but please move on, or is this what we are going to hear over and over again until Oct. 19th. Outside events such as the Duffy trial are bringing forth the autocratic and deceptive nature of the PM and the PMO. These are things the NDP and the Libs should be exposing, not leaving it for Canadians to find out through different events.

Harper is likely going to get elected again by an electorate that is bored listening to the nonsense.

"Let's talk about the environment. No, not carbon taxes. Sure they're necessary but that's a band-aid response and nothing more."

The corporate media directs the narrative that an election campaign takes on, by the way it covers it, which boils down to some absurd meme. Since they want Trudeau to win (Harper is no longer desirable; the NDP will "destroy the economy") they will favor his weaknesses (like no carbon pricing) while extolling its virtues with dog whistles to the business community.

The meme of this campaign (which really doesn't start until Sept 8) will be: "The Trudeau Liberals are now the left-wing party." A Trudeau majority is the most likely outcome. All of the wild swings in elections over recent years were not anomalies. They were orchestrated by the captured news media.

The plutocrats are our Good Shepherds. The pundits are their sheep dogs.

@ Lorne - this shrinkage of Canada's political spectrum has sucked the life out of our politics. There's no room for ideas and vision any more. We are now and henceforth to be ruled, not governed, by technocrats tweaking this or that, deferring this and ignoring all of the other and beating their chests about what a wonderful job they've done to the hearty applause of their party's trained seals. I have never had less confidence in the leaders of any of the three main parties to govern my country.