It doesn't matter much except to people of the Pacific coast of North America. It's called "The Blob" - a vast area offshore that is unusually warm, by some accounts up to 3C warmer than normal water temperatures. It's messing up marine life and doing a few other things and it might impact on the evolving El Nino and there's not a damned thing we can do about it.

The Blob has now split up with the southern chunk off the coast of California and Baja. The northern part is centered off the coast of British Columbia between Vancouver Island and Haida Gwaii.  It sort of looks like this: 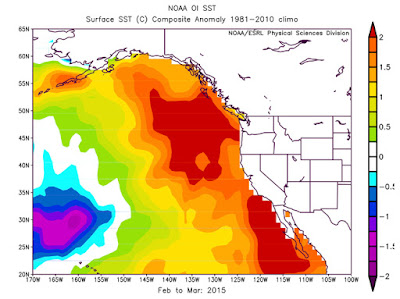 But now the Atlantic has developed a Blob of its own only this one is a cold water event. It looks like this: 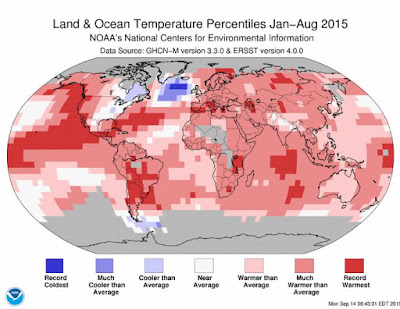 The Atlantic blob is shown as that expanse of dark blue off the southeastern tip of Greenland, immediately south of Iceland.

Prior studies have predicted such a trend. Climate scientists Stefan Rahmstorf (Potsdam Institute for Climate Impact Research) and Michael Mann (Penn State) published a paper in the March issue of Nature Climate Change which found that the Atlantic Meridional Overturning Circulation, or AMOC, is growing weaker.


The scientists hypothesized that "conspicuous cooling" in the northern Atlantic could be "due to a reduction in the AMOC over the twentieth century and particularly after 1970." A possible contributor to this trend is the "melting of the Greenland Ice Sheet," which they say is infusing the area with cold, fresh water, which is then interfering with the interplay between the varying temperatures and levels of salinity that drive the current.

The Washington Post's Chris Mooney questions whether the Atlantic Blob is the telltale of a weakening of the Atlantic Ocean conveyor:

I was formerly somewhat skeptical about the notion that the ocean 'conveyor belt' circulation pattern could weaken abruptly in response to global warming. Yet this now appears to be underway, as we showed in a recent article, and as we now appear to be witnessing before our very eyes in the form of an anomalous blob of cold water in the sup-polar North Atlantic.

Mooney writes that, if this trend continues, "there could be many consequences, including rising seas for the U.S. East Coast and, possibly, a difference in temperature overall in the North Atlantic and Europe."

Whatever is happening in the North Atlantic, it doesn't look like there's a goddamned thing we can do about it now.  Same, same for the Pacific. We're all just along for the ride at this point. Buckle up.

Just something else for the global warming/climate change deniers to deny and the masses to ignore. Here in Canada we allowing Harper to set the non-agenda. We are sleep walking over the cliff.

Huh. Kim Stanley Robinson's trilogy happening as we watch. Except without the plucky good-guy politicians who do anything about it.