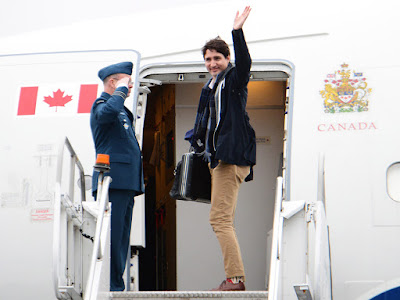 One line from Vice news sums it up perfectly, "Justin Trudeau is one of the few world leaders still trumpeting the pre-2016 dream that everything will be hunky dory in the mad world of global politics if we can strike up a few more free trade deals."

Vice columnist Drew Brown skips the debate over whether Trudeau is wise or an utter fool to think he can or should entangle Canada in a trade pact with China. Instead he focuses on Trudeau's claim that a Canada-China free trade deal with help defuze the reactionary populist politics spreading around the world.

It is a talking point that Trudeau and his neoliberal fellow travellers have invoked before. While there may have been some structural discomfort involved in the opening of domestic markets to foreign capital (and vice versa), overall the outcome of liberal trade is an inevitable win for everyone involved. Goods and services cross borders more easily (and cheaply) and freer migration fosters a deeper appreciation for human diversity. Corporate greed might make things look a little lopsided, but it’s nothing that modest state redistribution of the quintessentially Canadian variety can’t sort out.

It is a very nice story but, as we now know, it leaves out a few loose ends. Whenever newly unfettered capital starts freely crossing borders, it is usually accompanied by a cast of somewhat less savory characters: community dislocation, deindustrialization, declining environmental and labour regulations, degraded national sovereignty, and the occasional financial meltdown. (For what it’s worth, Trudeau deserves credit for making more progressive environmental, labour, and gender regulations a sticking point in negotiations.)

Free trade might be a win-win on paper for the countries involved, but within those countries themselves it’s very often a win-lose arrangement for the rich and the non-rich, respectively. In other words, it tends to create its own problems, one of which appears to be right-wing, nationalist reaction. (It’s a convention to just call this ‘populism’, which is sort of true, but also sort of not true, and something we should probably talk about later.)

In the case of Chinese-Canadian trade in particular, there are reasons to suspect that even a successful bilateral free trade agreement might do more to inflame reactionary populism at home than put it out. Wells observes that Canadian access to the Chinese market also entails China’s further access to the Canadian market. This risks further inflating urban real estate values (particularly on the west coast), as well as hollowing out communities based around agriculture and manufacturing. And as a general rule, people who lose a good job and/or get priced out of their home tend to become rather politically agitated.

It’s not clear whether or not the prime minister and his team genuinely believe more free trade will fix the problems it simultaneously causes, or if this is just a reflexive talking point he threw to the media after a long day of trade talks that amounted to fruitlessly banging his head against a wall in Beijing.

My take is that the school marm is still the school marm, short on both the experience and intellectual depth to tackle a hydra such as free trade with China. He can't even make any serious inroads on climate change, the gravest threat facing the Canadian people. That's something that will take a truly Herculean effort over many years, perhaps decades, and Trudeau won't even get near the starting blocks. In difficult and dangerous times it takes more than posing for selfies and making apologies, no matter how deserved, to lead a country. Going by his track record from his first two years in power, this son of Margaret does not seem to pass muster on leadership.
Posted by The Mound of Sound at 9:09 AM

Nixon and PET went to China to create globalism. PET and JFK ditched economic progressive development (that continued in Europe) on an SJW pivot/distraction. Junior is just another smooth-talker representing upper-crust interests: the Obama in the North.

The only good Liberal PM was Lester Pearson who created the social safety net with Tommy Douglas - the only good Dipper. (Without those two, we'd be right at the bottom of the developed world along with the US - instead of second bottom!)

Anyong....Apparently a trade agreement has been signed regarding beef from Alberta? to China. Please tell me how 150 million does it....that is a spit in the bucket.

As long as Junior is gadding about he looks like he is doing something. Most observers haven't yet noticed that he is not accomplishing anything.

If Trudeau is holding out for the best deal then good for us.
I remember a newly elected Stephen Harper rushing to sign a softwood lumber deal so as to show proof of his negotiating skills!
Actually he sold us, Canada, short.

I don't think Trudeau is in charge of the dealing regardless of his entitlement. I think Chrystia Freeland is. I may be mistaken but I think she is fairly competent.

British Columbia sure "got done" on softwood, TB.

I am semi retired self employed and enjoying life to the full.
I did business with the then forestry based Island economy.
The first customer I lost was the Youbou sawmill which was closed when the cutting of logs going to local mills model was stopped ( by , I think, Zirnheld of the NDP) under pressure from the USA.
There was a time when I could for a whole day canvass customers from Nanaimo to Port Hardy , on the left hand side of the road going north .
I could then spend the next day canvassing the same ,general, clientele whilst driving south for a whole day.
Nowadays , if so inclined , it takes a day to drive, there and back, and canvass anyone of worth .
Such is the fate of both the BC forest industry and the fishing industry.
What really pisses me off is that both logging and fishing SHOULD be sustainable industries!
I remember with astonishment , a few years ago, the Mayor of Prince Rupert shouted out that they needed fracked gas to provide jobs!
He added..
We DID have fishing and that went.
We DID have pulp paper and logging and that went.
Now we need fracked gas!!!

Stupid is as stupid does I guess.

Perhaps China is not a good bet?

A lousy state of affairs, isn't it, Trailblazer. British Columbia has been ill-served by Ottawa whether under Conservative or Liberal governments. I sometimes wish we could leave Canada and confederate with Washington and Oregon. I once was fiercely loyal to Canada but that fealty has been pretty much stripped out of me the past ten or fifteen years.

The Chretien/Martin Liberals went to war in Afghanistan to make nice with Bush Jr. to get a better deal on softwood lumber. Still got hosed! To the tune of $10B!

That's why managed trade is better. If the Canadian government realized this was a major irritant in America, they could've slapped duties on exports to ameliorate the problem and have the cash going into Canadian coffers instead of American. But noooooo! They had to stubbornly cling to free trade ideology and get clobbered!

Also funny how Obama and Junior suck up to China and get spit on. Then Trump plays hardball on NK and their mercantilism and they treat him like royalty! "Art of the Deal!"

Today Junior is teaming up with Mexico to save the exodus of auto jobs from Canada. I hope Trump burns his arse on this NAFTA renegotiation! Whatever Trump gives us on NAFTA, it will be better than what we got now, that's for sure!

"Ask not what your country can do for you, but what you can do for entitled upper-crust moochers!"

I sometimes wish we could leave Canada and confederate with Washington and Oregon.

Too many gun nuts in Oregon.

Too a degree.
We, Canada , had more efficient mills both lumber and Pulp and Paper.
The money taken by the US sawmills was reinvested to make their mills more efficient.
After the downturn which really devastated BC mills the industry slowly but surely made our mills more efficient.
Now we compete on somewhat equal terms with the mainly southern US mills that use poor grade Georgia pine and the like that big retailers such as Home Depot dislike.
It has all come at a cost.
The environment has suffered as have the employees; who incidentally are feeling the pinch once again.
The forest industry is , at the moment, self regulating.
There are some bad operators logging OUR resource both on the Island and the interior.
eg, the loggers in the interior have had a field day using gaining access to pine beetle killed timber via falling still good trees.

FWIW; our pulp and paper mills suffer from the lack of wood chips which now come from as far as Alaska!
This is due to the closing of mills and the export of raw logs.
Raw logs; another "efficiency" for profit.
That said Washington State and Oregon mills are suffering the same fate.

In the long run we are 'efficency'ing! ourselves to ruin.
That is if you don't have shares in the forest companies.

Shit; off on a tangent again.
Did you ever wonder why the BC Government promoted the Government Employee Union to invest in Island Timberlands?
Raw log exports, WGAF.