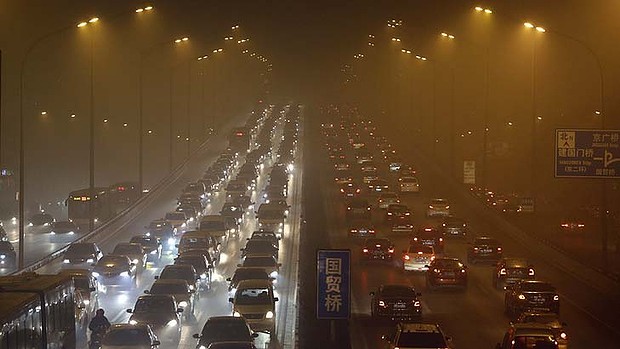 What's the difference between daytime and night time in Beijing?  Fewer cars on the Ring Road.

A blanket of toxic air that has blocked out the sun across most of north China is dominating social media and looming as a serious political challenge. Visibility was reduced to a few hundred metres for much of the weekend in the Chinese capital and many of the city's 20 million went online to vent their fury about ''apocalyptic'' and ''post-apocalyptic'' conditions.

The Beijing News covered the story with the headline ''Blown the Charts'', showing that several air monitoring stations were recording levels higher than their indexes could cope with.


Monitors at the United States embassy in the suburb of Liangmaqiao, in Beijing's inner east, said the concentration of airborne PM 2.5 particulates reached 886 micrograms per cubic metre at 8pm on Saturday, believed to be the highest since it began measuring in 2008. Readings above 300 are classed as ''hazardous'' by US environmental standards. These PM 2.5 particulates, 2.5 microns in diameter or smaller, are considered the most harmful to health because they can penetrate easily into human tissue.

I thought Harper's religion does not believe in Global Warming. Harper will see pollution such as this in China. It won't even remotely stop Harper from selling, the dirtiest oil on the planet, to the most polluted country on the planet.


Even the numerous earthquakes in BC will not stop Harper, from stringing the Enbridge pipeline across that province. There are also, mudslides, with loss of life. There are rock slides, avalanches, extreme forest fires and swift flooded rivers, that carry away homes and highways.

The massive dirty oil tankers from China, have one of the most treacherous seas in the world to navigate. There are extreme storms on that Northern Coast. Beyond the shadow of a doubt? There will be a tanker spill and a pipe burst.

Trying to get anything, into Harper's block head, is a hazard in it's self.