If Plants Can't Grow, What Fate Awaits a Hungry People? 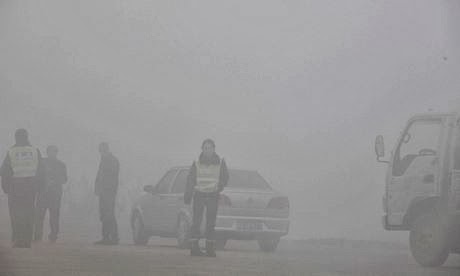 Smog in China has become so severe that it's interfering with photosynthesis.

Chinese scientists report that China's smog-clogged atmosphere has taken on aspects of "nuclear winter" and could wreak havoc on the country's already stressed food supply.

Beijing and broad swaths of six northern provinces have spent the past week blanketed in a dense pea-soup smog that is not expected to abate until Thursday. Beijing's concentration of PM 2.5 particles – those small enough to penetrate deep into the lungs and enter the bloodstream – hit 505 micrograms per cubic metre on Tuesday night. The World Health Organisation recommends a safe level of 25.

He Dongxian, an associate professor at China Agricultural University's College of Water Resources and Civil Engineering, said new research suggested that if the smog persists, Chinese agriculture will suffer conditions "somewhat similar to a nuclear winter".

China still hasn't seen the public health blowback that is inescapable from having so many people so heavily exposed to PM 2.5 particulate air pollution.  There is some suggestion the country is looking at a public health disaster.

Early this month the Shanghai Academy of Social Sciences claimed in a report that Beijing's pollution made the city almost "uninhabitable for human beings".

The Chinese government has repeatedly promised to address the problem, but enforcement remains patchy. In October, Beijing introduced a system of emergency measures if pollution levels remained hazardous for three days in a row, including closing schools, shutting some factories, and restricting the use of government cars.

China's leadership want to decarbonize their country's economy but that's a massive undertaking which will require plenty of time, resources and economic dislocation.  Unfortunately there's no good precedent for the challenge that China faces, its consequences and how it can ever be rectified.

It will indeed take time, resources and economic dislocation. On the other hand, their economy is slowing and they're running into some problems with continuing to rely on exports as much as they have.
They once again have good use for big public works programs (as do we, really), and a crash green energy program could be a significant component of that. And the results would be welcome for them even aside from the increasingly important environmental benefits: They have to import quite a bit of their energy, which is a vulnerability.

I think they've got a huge, public health crisis coming their way. This PM 2.5 problem is a killer and city dwellers are enduring it again and again. When 25 ppm. is the safe limit and you're consistently running over 500, upwards of 540, you're killing citizens years before they actually succumb to the effects.

This will have implications for coal exporting nations like Australia. China will cut coal imports to reduce pollution.

The Australian government is supporting the fossil fuel industry at the expense of renewable energy. Likely it will turn out they have backed the wrong horse, not only environmentally but also economically.

That's been the subject of some debate in Australia, DC. The Abbott government seems to be doubling down on coal exports to China, even sacrificing parts of the Great Barrier Reef to expand coal exports.

When energy experts talk of "stranded assets" the first on their list is coal. Given that coal has fueled Australia's recent economic miracle, it's hard to imagine what a collapse of that industry will mean for the country.


Hi,
This is very attractive post that is having great & beneficial