All the Enviro-News Fit to Print

There's a new climate news aggregator, the Climate Desk, www.climatedesk.org.   It's a joint effort of The Guardian, Grist, Wired, Mother Jones, the Atlantic, Need to Know, Slate, and The Center for Investigative Reporting.

Mother Jones offers a tale of the mutant heat waves of March depicted in the chart below: 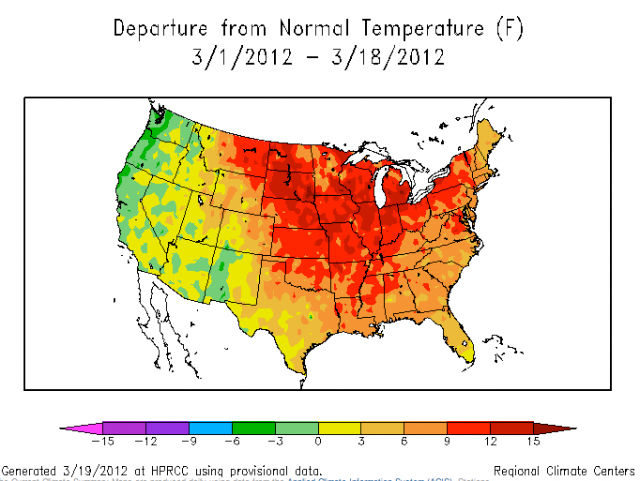 Although it looks as though people spread across most of North America don't need charts to know they've been abnormally warm lately.  I'm from that little corner in the upper left where we have to read about these things.

Mother Jones also offers up a report on a new law in Pennsylvania that allows doctors to access information on chemicals used in natural gas fracking but prohibits them from sharing that with their patients.

And the ClimateDesk has produced this hope inspiring video of this year's crop of GOP climate hawks:

The video apparently touched a lot of nerves.  MIT researcher Kerry Emanuel  received a lot of hate mail following the video including veiled threats to his wife.

Emanuel notes that in the full video he went on to explain that the Republican candidates “have either been misled in which case it’s not great to be part of the political system where candidates for the president of the United States could be so misled on such an important issue, or they were dishonest, in which case equally bad in my view: How could we live in a country where candidates are being dishonest about an issue of such importance?”
Posted by The Mound of Sound at 12:59 PM

Take a look at this. http://i.imgur.com/YTR8u.jpg
i.imgur.com The picture says too much.