Green on Blue Now #2 Cause of Allied Death in Afghanistan 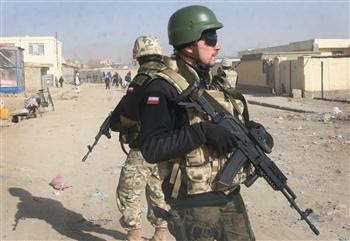 Three more Western soldiers gunned down by their Afghan counterparts today, two Brits, one American.   Attacks by our Afghan allies on Western forces now rank second only to improvised explosive devices in our fatalities.   Almost one out of three recent fatalities has been from 'green on blue' attacks.

The problem escalated last month after American soldiers burned Qurans at a military base outside Kabul in an attempt to get rid of books they said contained secret notes shared between prisoners. The incident sparked a deadly backlash.

The Taliban-led insurgency has tried to capitalize on the anger by urging Afghan forces to turn their weapons on their coalition counterparts.

Since the year began, more coalition service members have been gunned down by Afghan troops than by insurgents. A total of 16 members of the U.S.-led coalition were killed this year in nine such "green on blue" incidents, representing nearly one-third of the 50 coalition fatalities caused by hostile action.

Since May 2007, more than 80 members of the coalition have been killed in such attacks, according to the coalition training mission in Afghanistan.

Since 2001 we have persistently and steadfastly violated every fundamental precept of counterinsurgency warfare in Afghanistan.   Now the last tenet is coming into devastating effect - counterinsurgency forces have a sharply limited shelf life after which they go from liberator/defender to occupier/oppressor in the minds of the local population.   And once your shelf life has lapsed it's virtually impossible to turn the situation around.  We're not even trying.   They know we're leaving and they have a lot of scores to settle.   They're also keenly aware of the new/old reality almost on their doorstep.