But What of the Balochs? 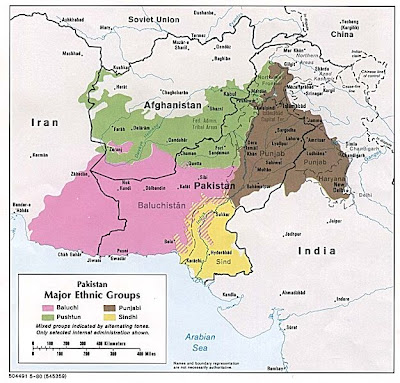 The New York Times recently ran an article questioning why the West was so concerned about the plight of the Palestinians yet cared not a whit about the suffering of the Balochs at the hands of the Pakistani military.

It seemed curious when I read it.   The Balochs, after all, have been going through this for a long time, well before the Americans showed up to turf the Talibs from Afghanistan.   We were pretty indifferent to their persecution for more than a decade.   Now, it seems, they've popped up on our radar.   What gives?

It's been reported in Asia Times Online that the CIA, MI5 and the Mossad have taken a sudden interest in Balochistan and supporting Baloch separatists/nationalists against Pakistan.   This comes at the same time when State Secretary Hillary Clinton is reading Islamabad the Riot Act over Iran.

What has Israel and the West up in arms is something discussed on this blog several times in recent years, the prospects of an oil pipeline connecting Iran to China, linked through Pakistan.   That pipeline would pass through the Baloch region of southern Pakistan.  It would create a direct and powerful link between South Asia and Southwest Asia and anchor Chinese hegemony in the region.  It could also expand the sphere of influence of the Sino-Russian Shanghai Cooperation Organization (SCO) right to the Persian Gulf.

Israel and the West are determined to block that linkup at almost any cost, even to supporting and arming an anti-Pakistan Baloch insurgency.   That's an insanely high-stakes/high-risk gambit for the West which is already flailing in Afghanistan.  It's the sort of adventure the Americans rarely do well and could wind up turning Iran, Iraq and Afghanistan squarely against the West.   Turning on Pakistan will virtually guarantee Pakistan will strongly back the Taliban in retaking control of Afghanistan.

Besides, should we really be working to destabilize Pakistan?
Posted by The Mound of Sound at 3:41 PM

They have already committed one of the classic blunders: never get involved in a land war in Asia.

I guess the next blunder is to purposefully destabilize a nuclear power.

Once upon a time America didn't do these things. For all the horrible evil it did do, it wasn't colossally stupid. The US knew enough to get the Soviets mired in a land war in Asia. When the Soviet Union was collapsing, the US provided special help to secure the nuclear arsenal. I hope that the US would offer Pakistan the same help if needed and that Pakistan would accept.

US foreign policy is stupid and incredible. Ron Paul, the presidential candidate, says some interesting things sometimes especially on the foreign policy of US. In one of the debates he said that former USSR tried conquering Afghanistan and look what happened to them and he added that same could happen to USA. Media did not pick up his statement but I think he hit the nail right on the head.

I should add that have humans really evolved? When the major weapon humans had was a knife and they could kill a lot fewer people. Now in the name of self-defence we have atomic bombs and millions can be killed in a split second or we may end up destroying all life on the planet earth.

@ Anon. The US is going to have a difficult time persuading Islamabad to let it 'secure' their nuclear arsenal if it is fomenting unrest in Pakistan's Baloch territories. The Baloch region has considerable mineral riches making it the prize area in all Pakistan. That's why the Pakistan army is suppressing nationalist Balochs.

@ LD. America needs to rationalize its interests in South Asia. It seems to wind up both pro- and anti-everyone and everything. It can't have everything and in all ways. There are too many rivalries and competing interests and they span tribal, national, regional even global dimensions. An action on one plane can have a ripple effect on others. You wind up racing around trying to put out fires you have unintentionally set.