In Missouri, Truman, Disney and Mark Twain Share the Stage with Rush Limbaugh 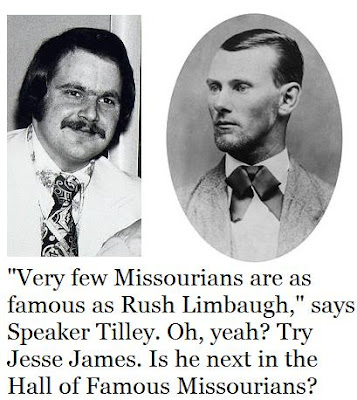 Apparently the state of Missouri sees Rush Limbaugh as one of its greatest native sons.

"...state House Speaker Steven Tilley (R) has commissioned a statue of Limbaugh to stand among those of Harry Truman, Walt Disney, Laura Ingalls Wilder, Mark Twain and others who, unlike Limbaugh, wouldn’t also qualify for an inclusion in a hall of “Infamous” Missourians. Wouldn’t you love to hear Truman’s take on this?"
Posted by The Mound of Sound at 11:36 AM

I'm sure Harry would say something like what he said to old Joe Kennedy.

The story goes that when Joe came up to Harry and asked if FDR was still fooling around with Missy Lehand, Truman said, "If you say another word, I'm going to throw you out of this window."

I can't believe old philandering Joe had the nerve to ask Truman that question. Good on Harry for his blunt retort.

If Missouri had an ounce of self-respect, it would be burying any connection to the poisonous Limbaugh.

I'd be interested in Mark Twain's take on Rush