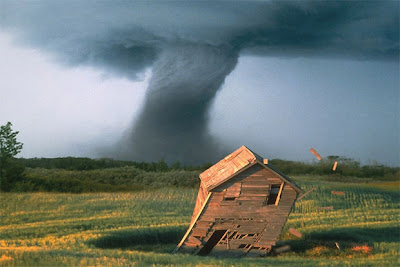 How can a people be so damned quick to see what's not there yet so unwilling to see what is?  Is it because they can't figure out who to bomb, invade or besiege?

The American people were more than willing to accept that Saddam had stockpiles of weapons of mass destruction even though teams of weapons inspectors said he didn't.  We know how that turned out.  Yet when their communities lie in shambles with broken and crushed bodies scattered about from waves of winter tornadoes, when vast swathes of their heartland are now annual floodplains when drought and sweltering heat become the new normal across the south and endanger its very habitability, they reject the notion of global warming and do that in increasing numbers.


"Bunny Howe survived the storm with her 9-year-old grandsons by climbing into a bathtub as she watched the wind pick up one of her horses in the back yard, then overturn part of a tractor-trailer in the front yard.
"That's when she got on top of the children and held the bathroom door shut with her feet.
"The children asked her, "Ma, what are we going to do?'" She told them, "We're going to pray."'
Well, good luck with that.  It's just that your god didn't seem to be listening when four years ago Georgia governor Sonny Perdue declared a day of prayer for rain or last year when Texas governor Rick Perry declared an entire long weekend as a pray-in for rain.
Superstitious chanting doesn't seem to be delivering relief, does it?   Yet all those Republican hucksters who tell you that climate change isn't man made, that the changes in climate bringing you those whirlwinds are all natural, and that the theory of anthropogenic global warming is a hoax perpetrated by an international coven of evil, money grubbing, socialist, heathen scientists - those homegrown rightwing nutjobs don't seem to have any answers either, do they?
Maybe you'll figure it out some day but maybe not.   Your self-blinding fundamentalism and the unscrupulous political leadership that prey on you types are setting the stage for a new sort of leader, the political Shaman.  A preview of it came from that Georgia whack job, Sonny Perdue.   After his official day of prayers for rain turned out to be a bust, he doubled down.   The lack of rain, he said, was god's way of getting your attention.  It was god's way of telling you to stop wasting so goddamned much water.
When political leadership can't come up with answers to existential threats and begin pretending to channel god to contrive excuses, you had better think twice.  If you go along with that, there's a chance you might just turn into a Mayan.
Posted by The Mound of Sound at 8:20 AM