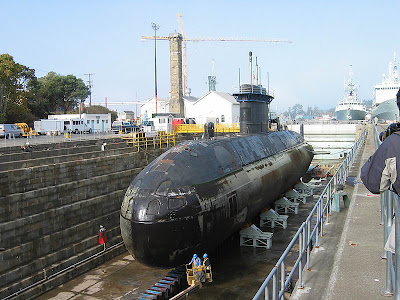 Those four second-hand subs the Defence Department duped the Canadian government into buying?   18-years after we got stuck with them, one of them, HMCS Victoria, actually managed to fire a torpedo.  Victoria is the only one of the four to fire a torpedo which is probably a good thing because the other three aren't even in the water.

A Canadian Navy comedian couldn't restrain himself at the joyous event.  "As the submarine fleet achieves steady state it will be ready to act decisively at sea in defence of Canada, when and where needed", Capt. Luc Cassivi, director of the Canadian Submarine Force, said in a news release.

The Victoria fired her torpedoes at the Nanoose underwater weapons range in the waters north of Nanaimo.   Funny, I drove right past there and didn't see a thing.  Oh way, I get it, the sub was underwater.

The Victoria began life as HMS Unseen in a Scottish boatyard in 1987.    It was commissioned into the Royal Navy in 1991 and mothballed after just three years in service in 1994.  They were fobbed off on Canada in 1998.  The Canadian Navy hopes the Victoria will become fully operational this summer.  If it does, Canada will have a submarine force of exactly one boat out of the four we bought 14-years ago.

And a British MP, government backbencher Mike Hancock, the Liberal Democrat MP for Portsmouth South, is asking awkward questions about the sub deal in his Parliament.

"Why were the Canadians daft enough to buy them?"

"My God, it's a sad tale, isn't it? 'Buyer beware' should have been painted on the sides of these submarines."

The subs were based in Hancock's riding before the Royal Navy unloaded them on us.   Now he's suggesting that Canada should ask for its money back.  Of course before we could get to the point of demanding a refund, we'd have to track down the slack bastards at DND who are responsible for persuading the government to purchase these disasters in the first place.


Canada probably does need a submarine capability because it's almost certain our northern territory is going to be disputed, commercially if nothing else, in the decades ahead.  The Arctic is losing much of its ice and may become ice free, something that encourages both shipping through the Northwest Passage and seabed resource exploration.

Pouring billions into early 1980s technology submarines and expecting them to meet operational requirements for decades to come sounds foolish at best.  Today's state of the art, non-nuclear submarines are being built by the Germans like the 200 Series and Gotland class boats  built by Thyssen Marine that feature high-performance, long-range fuel cell propulsion instead of the air dependent diesel engines on Canada's antique subs.
Posted by The Mound of Sound at 1:33 PM