Of June and High Water 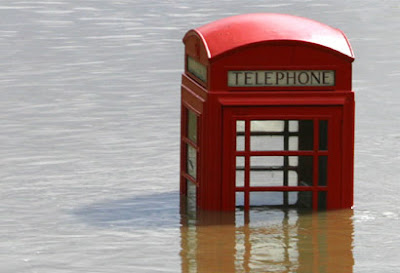 British homeowners have been told they'll have to fend for themselves come June when their government's agreement with Brit insurers for provision of flood coverage lapses.

Insurers are reacting to what they consider a refusal by the austerity-obsessed Cameron government to honour its obligations to improve flood defences.

The agreement, known as the Statement of Principles, is crucial for those households that have already been flooded as it means that insurers will continue to provide cover for existing customers, albeit at a higher premium, as long as the government continues to improve flood defences.

However, following a substantial investment in flood defences by the Labour government, the current government has cut funding.

The insurance industry believes the government has now reneged on its part of the deal and consequently it does not want to continue with the agreement, a situation that leaves thousands of households at risk of becoming uninsured by next summer.

This is simply an inevitable aspect of climate change.   Who is to make good the losses sustained from cyclical floods or droughts or severe storm events of increasing frequency and intensity?   If insurers don't want to carry those losses and governments don't want to burden taxpayers with the costs of those events, then the property owner has to be stuck with the loss.  I wonder how many of those homeowners believe global warming is a hoax?
Posted by The Mound of Sound at 9:11 AM

Cut the worlds population in half and the earch will be able to rest for a bit.

And how do you propose we eliminate 3.5-billion people?

We probably, at this point, can't sustain our existing 7+ billion population. Leaving aside global warming issues, we have become dependent on a number of unsustainable practices from overfishing leading to collapsing fisheries around the world, to deforestation, to desertification - the overuse and exhaustion of soil transforming it into desert, to our depletion of groundwater stocks or aquifers to fuel the so-called Green Revolution that got us to this astonishing population level.

To address these we would need an international government with very strong and effective powers essentially capable of some redistribution of wealth. Think that's about to happen? Even what we perceive today as global stability is in large measure chaotic and clumsy. And how shall we address what are in reality inequality issues among nations when we cannot deal with them within our own societies?