Brace Yourself for Two Weeks of the Most Sincere, Heartfelt Bullshit You've Ever Heard.


Give 'em credit, they got off to a rip-roaring start. They even used that awesome line about how "this is the last generation that can stop climate change." As if.

I'd much prefer to hear them say "our generation shall stop climate change" preferably before we trigger a mass extinction of life on Earth. "We're gonna do whatever has to be done. No excuses." Only that's not what we're going to do.

We, the community of nations, are going to negotiate. We're going to negotiate to do about as little as each can get away with. That's certainly true for Canada. When this year's climate summit is over, we'll still be committed to flooding world markets with our coal and our conventional oil and, especially, our environment-exterminating bitumen - just as much dilbit as we can pump to "tidewater." Oh yeah, but we've got carbon taxes even if they are minuscule. 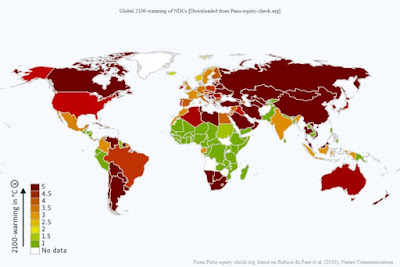 What it shows, and we'd rather not see, is that, if the rest of the world was as determined to thwart climate change as much as Russia and China and Canada (yeah, that's us), the world by 2100 would be 5 degrees Celsius above pre-Industrial Revolution temperatures. How does that piddly little carbon tax sound  now?

The key to keeping global warming within survivable limits is no secret. It's not even complex. Back at the Paris climate summit in 2015 when Trudeau and McKenna strolled onto the floor after having trounced climate villain, Stephen Harper, to announce "Canada's Back!!", the then director of the Potsdam Institute, Hans Joachim Schellnhuber, said they could meet their 1.5 C target but it would require the "induced implosion" of the global fossil energy industry.  This is what Johnny Schellnhuber had in mind by 'induced implosion':

And that is precisely what our prime minister and most premiers do not have in mind. There'll be no induced implosion of carbon energy for them, anything but. They will, however, negotiate. And by negotiate that includes negotiating away your grandkids' future.

Carbon taxes? That's like handing you an umbrella instead of a parachute before you're kicked out of the aircraft door. That's a dandy brolly. Good luck!

That's not to say carbon taxes aren't good or necessary. They are. They are just one measure we must take. The Herculean chore isn't carbon tax. It is in engineering a new, carbon free economy. That means investing massively in low-carbon energy options and speeding up the transition from fossil fuels to alternative, clean energy. That might mean making perpetual exponential economic growth a secondary priority.  No sign of that on Canada's horizon.

The sorry fact is that we're not going to get out of this mess, not going to avert a possible mass extinction event, without clear-headed determination and a willingness to sacrifice - a lot. Industrial and trade strategy now has to be geared around ecological and environmental restoration.

Earth needs a break. If we don't give it the break it needs, it will break us.

The front page of the Globe and Mail today is all about how the oil industry is in trouble, and how they have been screwed by the politicians. Sentiments expressed include how Canada needs a pro-energy government and that climate change is nonsense. The solution is to build more pipelines and shut down radical environmentalists. Amusingly, some also claim Trudeau bought the pipeline to insure it would not be built, and if he wanted to build it, he could just order it done by proclamation.

If we are counting on the energy industry to move to a carbon free model, we are kidding ourselves.


There's an element of "we have no choice" to our governments' (plural) prevarications on climate change. We'll collect nickels and dimes over here for carbon taxes and then fork out billions of dollars in subsidies to the fossil fuel industry. How do you square that circle.

I believe what the scientific community, the UN, WMO and others are saying: this is our final chance. Ours is indeed the last generation that has a chance to bring mankind in for a survivable crash landing. But that's what it's going to be - a crash landing. If we're lucky, we'll come out of it with a thoroughly banged-up civilization and we'll need new rules - rules based heavily on equity. Where is the willingness to accept what some, many see as punitive sacrifice? If you find out, do let me know.

Here’s some heartfelt bullshit from an email I was forwarded this morning by a scabby glad-handing acquaintance who’s a charter member of the old Reform Party:

The Canadian Taxpayers Federation wants money. Apparently they’ve generated a “petition against the carbon tax” and now they’ve sent out emails to the guys who signed it explaining that they need money to pay for lawyers because “the CTF needs to be in the courtroom to stand up for beleaguered taxpayers” when Ontario challenges “the Trudeau carbon tax”. (I guess they need the money so their lawyers can pick up the tab when they go for coffee and muffins with the provincial lawyers after they’ve taken in the scenery.)

They provide “a list of radical, well-funded, pro-carbon tax organizations” that will be arguing in favour of the carbon tax in Saskatchewan and that “you have to believe … will be entering the Ontario court battle too”. It’s a “who’s-who list of powerful pro-carbon tax activists with big networks of donors that have almost bottomless pockets”.

Because the other side has lots of “well-heeled donors”, they’re looking for a hundred bucks each from 800 supporters. I don’t know whether they made an earlier appeal to supporters in Saskatchewan to fund the case in that province.

Well, I guess that’s what the guys at the CTF do for a living: grab hold of any excuse to ask people for money. There’s no grubber like a libertarian grubber. It’s ideological.


I know what I'd like to say about CTF, but my mother taught me to hold those thoughts.