Say What? Tucker Carlson Said What? 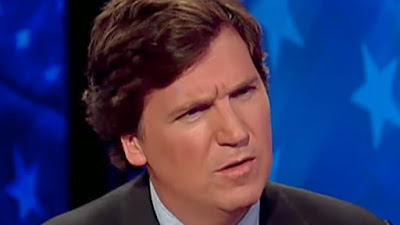 Are the rats deserting the sinking ship?

In a ranging interview with a Swiss newspaper, Die Weltwoche, Carlson  has slammed Trump saying he's just not "capable."

Asked if he thought Trump had kept his promises, Carlson replied with an abrupt "no."

I think Trump's role is to begin the conversation about what actually matters. We were not having any conversation about immigration before Trump arrived in Washington. People were bothered about it in different places in the country. It's a huge country, but that was not a staple of political debate at all.

When asked what he thought Trump had achieved, another zinger.


Not much. Not much. Much less than he should have. I've come to believe he's not capable of it.

...you really have to understand how it works and you have to be very focused on getting it done, and he knows very little about the legislative process, hasn't learned anything, hasn't and surrounded himself with people that can get it done, hasn't done all the things you need to do so. It's mostly his fault that he hasn't achieved those things. I'm not in charge of Trump.


I'm not against an aristocratic system. I'm not against a ruling class. I think that hierarchies are natural, people create them in every society. I just think the system that we have now the meritocracy, which is based really on our education system, on a small number of colleges has produced a ruling class that doesn't have the self-awareness that you need to be wise. I'm not arguing for populism, actually. I'm arguing against populism. Populism is what you get when your leaders fail. In a democracy, the population says this is terrible and they elect someone like Trump.

...The world of affluence and the high level of education and among-- I grew up in a town called La Jolla, California in the south. It was a very affluent town and then I moved as a kid to Georgetown here in Washington. I've been here my whole life. I've always lived around people who are wielding authority, around the ruling class, and it was only after the financial crisis of 08 that I noticed that something was really out of whack, because Washington didn't really feel the crisis.

If you leave Washington and drive to say Pittsburgh, which is a manufacturing town about three and a half hours to the west, you drive through a series of little towns that are devastated. There are no car dealerships, there are no restaurants. There's nothing. They have not recovered. I remember driving out there one day, maybe eight or nine years ago and thinking, boy, this is a disaster. Rural America, America outside three or four cities is really falling apart. I thought if you're running the country, you should have a sense of that. I remember thinking to myself, nobody I know has any idea that this is happening an hour away. That's kind of strange since we're the capital city in charge of making policy for everybody else... Massive inequality does not work in a democracy... You become Venezuela.

On Alexandra Ocasio Cortez and her socialist cohort, Carlson said, "That's the future."

On the prospects of a second American revolution:


I don't think that we're anywhere near an outbreak of civil war, armed violence between two sides for a bunch of different reasons... Testosterone levels are so low and marijuana use is so high that I think the population is probably too ... What you don't have, prerequisite fall revolution, violent revolution, is a large group of young people who are comfortable with violence and we don't have that. Maybe that will change. I hope it doesn't. I don't want violence for violence. I appall violence, but I just don't see that happening. What I see happening most likely is a kind of gradual separation of the states.

If you look at the polling on the subject, classically, traditionally, Americans had antique racial attitudes. If you say, “Would you be okay with your daughter marrying outside her race?” Most Americans, if they're being honest, would say, “no, I'm not okay with that. I'm not for that.” Now the polling shows people are much more comfortable with a child marrying someone of a different race than they are marrying someone of a different political persuasion.

“I'd rather my daughter married someone who's Hispanic than liberal”, someone might say. That is one measure. There are many measures, but that's one measure of how politically divided we are and I just think that over time, people will self-segregate. It's a continental country. It's a very large piece of land and you could see where certain states just become very, very different. Like if you're Conservative, are you really going to live in California in 10 years? Probably not.

Personally, I would welcome a new, perhaps dual, political entity to the south. A separation of the states, red and blue. Most of our neighbours, including the Pacific coast and the important part of the Atlantic coast, would be much more like-minded than the America that now confronts us. While we're all in for a battering in the decades ahead, the Slave States, the south generally and the "flyover" states, a.k.a. the Heartland are in for a particularly arduous time. Let the Gullibillies have them much along the lines in Chuck Thompson's "Better Off Without 'Em."

Well, that's fine, in a German newspaper. Let's see if he breaks his Trump bond in front of the millions of Rubes - the ones who think Germany ended after WWII - on his Fox News platform?

I seriously doubt it. The Great Market God rules media too, and, well... see the Weekly Standard re. failing to fall prostate in the presence of the most loathsome of all Earth's orange creatures.

This is the media equivalent of retiring senators being mildly critical of Trump.


It will be interesting, Brian, to see how Carlson deals with this at the end of his European book tour.

Tucker Carlson and Ann Coulter are neocons who only care about building the wall. They could be closet Resistance.

All Resistance leads to keeping free-trade globalization alive. That's why the corporate Fake News is gaslighting the people to skyscreaming hysteria.

By killing "terrible trade deals," Trump is preventing the Western economy from collapsing into world war.

Last time around, mooching Robber Barons thought there was an inexhaustible amount of money they could loot from the Western economy. They thought wrong. They triggered a deflationary death spiral that brought Hitler to power.

Trump is also working with Mexico's new left-leaning government to bring living wages to Mexico and the Americas to stop the need for economic migration. Which, of course, is the sensible thing to do and the real progressive position for decades. (After 50 years of pretenses and downward spiral.)

Maybe void-worshiping neoliberals and neocons can still destroy the world. If they really put their black souls into it!


No, Anon, Chop,Chop will be the sound of your Lard Prince once Mueller's finished with him.

Could it be that Fox News will no longer be Trump's official mouthpiece?

Considering that the "flyovers" live on the land that produces most of America's natural resources and nearly all of its food--not to mention raise most of the country's trained military personnel, you might want to be careful what you wish for. I grew up in the rust belt and currently live among the soft (and often soft-headed) coastals, and can say for a fact that any 2nd American Civil War would be a short one. Frankly, I really wouldn't want to live in a country controlled by either side given each's expressed desire to see the other wither and die.

Cracks are appearing within the USA right wing.
They are finally admitting that the Emperor has no clothes.

BTW Mound your grandchild has been seen!!
https://www.usednanaimo.com/classified-ad/65-BSA-C15-Starfire-Roadster-motorcycle-vintage_32573425