Dear Ottawa. Don't Do to BC's Salmon What You Did to Newfoundland's Cod. 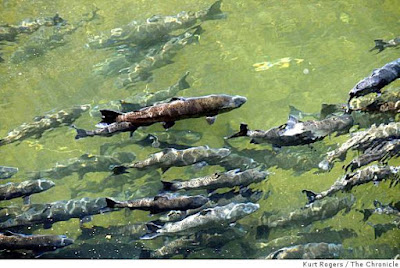 Half of Canada’s chinook salmon are endangered, with nearly all other populations in precarious decline, according to a new report, confirming fears that prospects for the species remain dire.

The report by the Committee on the Status of Endangered Wildlife in Canadaconcluded that eight of the country’s 16 populations are considered endangered, four are threatened, one is of special concern and the health of two remain unknown.

Only one population, which spawns on the Thompson river in British Columbia, is believed to be stable.

“For those of us who have been working on recovering chinook salmon runs in British Columbia, we knew they were in terrible, terrible shape for quite a while now,” said Aaron Hill of Watershed Watch, an organisation that monitors ecosystem health. “It was actually good to see it finally recognised by this federally mandated science body, because this hopefully initiates more serious protection efforts from the government.”

Watershed Watch has renewed calls for chinook to be listed under federal legislation which would afford the ailing populations more robust government protection. But similar calls were made last year, when the same committee of scientists found that one-third of sockeye salmon are endangered, and the federal government has yet to take action.

The decline of British Columbia's salmon stocks, whether from climate change or lax federal fishing regulations, powerfully impacts the coastal ecology. Spawning salmon are an essential foodstock for bears, eagles, and other land-based predators. The decline in salmon stocks is considered a major factor in the dwindling numbers of resident Orca.

Surely we learned our lesson with the collapse of Newfoundland's cod stocks. There's no excuse for Ottawa allowing a similar collapse on the west coast.
Posted by The Mound of Sound at 9:46 AM

The Decline of BC’s Salmon stocks are due to:

The real loss of the Salmon, is they were once the greatest nutrient pump in the world.

Hundreds of billions of 100 gram smolts would head out to sea, from their mostly sterile home rivers and creeks,

2-5 years later almost 10 billion would return, weighing 5 to 80 lbs, spawn and die. Their bodies would provide a bounty of food from May to March for the whole West Coast, from tidewater to deep into the Rockies.

Their bodies provided a burst of nutrients carried in from the sea, ( from the Arctic to Japan), to their natal streams right down to the estuaries, which everything in the water relied on, including their own hatched fry.

Through the actions of predators and scavengers, their bodies carried nitrogen and a mass of other nutrients deep into the rainforests, forests and high into the alpine areas.

The whole reason the Rainforest could grow 350 foot Douglas Firs on 3” of topsoil over bare rock or alluvial gravel,

Or an alpine meadow could grow enough sedge and seasonal berries to nurture a Grizzly bear and her cubs,

Or small streams like the Salmon River and it’s small lake system could support salmon runs in the millions,

Was because of this nutrient pump that is long gone.

Ever the repeat of Newfoundland & Labrador....not only did Newfoundland lose Cod, they lost the Atlantic Salmon. These salmon returned to the river to spawn, laid their eggs, and again returned back to their feeding grounds during winter..they didn't die off. That is, until the illegal dregs of the world found where they wintered over and took everything. They include the Russians, China and all of Asia. Now....there isn't much left for Canadian Fishermen. Talking about it isn't going to do one thing about your problem in BC. A parallel could be drawn between B.C. and France...that is protest in droves. However, Canadians like to talk and do nothing. Anyong