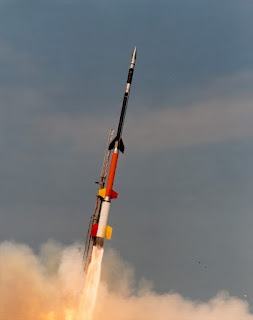 I wasn't aware of this and I'll bet neither were you.

January 25, 1995. Norway, near the Russian border. A Canadian designed and built Black Brant, four-stage rocket is fired on a mission to study the aurora borealis.  Norwegian authorities had advised their Russian colleagues of the launch but...


What [Norwegian authorities] didn't know ...is that the Brant's radar signature looks just like a U.S. sub-launched Trident missile.

The radar operators at Russia's Olenegorsk early warning station promptly reported the incoming missile to their superiors, but not a soul on duty within the military had been notified of Adolfsen's plans.

The officers at Olenegork believed it could be the first leg of a U.S. nuclear attack.

Four years after the Berlin Wall came down and Russia was in the throes of change, stable systems had been demolished and replacements had yet to fall into place. One thing that had gotten only more developed since 1991, however, was the Kremlin's mistrust of the United States.

So as the Brant streaked its way near Russian airspace, military officers had to decide if this was an electro-magnetic pulse attack that would disable their radar and allow for a full on American attack, and what they should do about it.

The matter was decided when the Brant separated, dropped one of its engines, and fired up another. The radar signature now looked so much like a multiple re-entry vehicle (MRV), a missile carrying multiple nuclear warheads, that military officers no longer had any doubt.

There were now five minutes during which the missile's trajectory would be un-tracked by Russian radar, and when it could strike Moscow; a slice of time that was devoted to deciding whether to launch a counterattack.

Boris Yeltsin was alerted, and immediately given the Cheget, the "nuclear briefcase" that connects senior officials while they decide whether or not to launch Russia's nuclear weapons. Nuclear submarine commanders were ordered to full battle alert and told to stand by.

Apparently Yeltsin doubted the U.S. would launch a surreptitious attack and within five minutes, Russian radar came back confirming the missile was heading harmlessly out to sea.

Russian citizens didn't find about about the incident for weeks, and of course it's been reported in the U.S. news since. But the event never achieved the renown of the Cuban Missile Crisis, though it seems to have brought us even closer to the brink of nuclear war.

In an effort to study one light show they nearly created another (more spectacular) one.


Seems like the came awfully close, Tal. And, of all Russian leaders, Yeltsin. Makes you wonder if he was sober at the moment of decision.