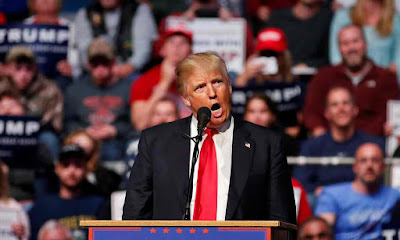 The Daily Beast has a report that looks into Donald Trump's nihilistic mind.  The future? He doesn't care. He won't be around then anyway.


Since the 2016 presidential campaign, Donald Trump’s aides and advisers have tried to convince him of the importance of tackling the national debt.

Sources close to the president say he has repeatedly shrugged it off, implying that he doesn’t have to worry about the money owed to America’s creditors—currently about $21 trillion—because he won’t be around to shoulder the blame when it becomes even more untenable.

The friction came to a head in early 2017 when senior officials offered Trump charts and graphics laying out the numbers and showing a “hockey stick” spike in the national debt in the not-too-distant future. In response, Trump noted that the data suggested the debt would reach a critical mass only after his possible second term in office.

“Yeah, but I won’t be here,” the president bluntly said, according to a source who was in the room when Trump made this comment during discussions on the debt.

The episode illustrates the extent of the president’s ambivalence toward tackling an issue that has previously animated the Republican Party from the days of Ronald Reagan to the presidency of Barack Obama.
But for those who have worked with Trump, it was par for the course. Several people close to the president, both within and outside his administration, confirmed that the national debt has never bothered him in a truly meaningful way, despite his public lip service. “I never once heard him talk about the debt,” one former senior White House official attested.

Apparently Trump imagines that perpetual exponential growth will solve all of America's debt problems and a good many other dangers.


“He understands the messaging of it,” the former senior White House official told The Daily Beast. “But he isn’t a doctrinaire conservative who deeply cares about the national debt, especially not on his watch… It’s not actually a top priority for him… He understands the political nature of the debt but it’s clearly not, frankly, something he sees as crucial to his legacy.”

The former Trump official adding, “It’s not like it’s going to haunt him.”

Doctrinaire conservatives only pretend to care deeply about debt and deficits. If you look at the debt by administration, you'll quickly notice the largest increases occurring while conservatives are in power. As Dick Cheney once quipped, "Reagan proved that deficits don't matter."

Trump is not deviating from the practice of conservative administrations since Reagan turned the US from the world's biggest creditor to its biggest debtor. The only surprise is that the media and pundits still buy into the bullshit about conservatives and fiscal prudence.


It's fascinating how Reagan flipped the switch on debt and deficits. Every postwar president, prior to Reagan, succeeded in reducing federal debt (as a percentage of GDP). Every pre-Reagan president, Democrat and Republican, even during the Vietnam War, hacked away at the national debt.

Reagan introduced neoliberalism to the United States as Thatcher did to Britain and Mulroney to Canada. The west was steered into the very ditch that holds us captive today.

Having an ongoing and rapidly accumulating debt is also convenient for the extreme right, Mound. That way they can always be advocating for cuts to the most vulnerable at budget time, so as not to "saddle future generations with a debt burden."

True enough, Lorne. It was only a matter of days after the Republicans pushed through their massive tax cuts for the rich that they began moaning about the national debt and how they would have to cure the real problem - social security and medicare.

Trump's father bailed him out more than once. Perhaps he thinks the old man will show up again.

Government spending on support programs deprives the citizen of the opportunity of experiential development through the acceptance of personal responsibility. I could hardly afford Johnnie Walker Black and was struggling on grants from the Ontario Stereo Acquisition Program and there wasn’t any government there handing out entitlements. Now I’m a bonafide rugged individualist.