Vlad Says: US Out of Syria, UK Out of EU. 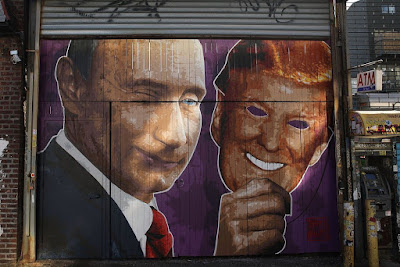 All Vlad Putin wants for Christmas, the Americans to pull their forces out of Syria and Britain to go ahead and quit the European Union. Apparently he'll take care of those pesky Ukrainians himself.


“Why do we need that?” the Russian president asked. “It’s the degradation of the nation – do we want that? It was fashionable at one point to promote suicide, does that mean we should all go hang ourselves? Count me out.”

Vlad took time out of his year-ender to tutor the Brits on the fundamentals of democracy.


“The referendum was held,” the Russian president said from Moscow during his annual press conference, which is broadcast on national television. “What can she do? She has to fulfil the will of the people expressed in the referendum.”

Britons may see some irony in a lesson on democracy from a fourth-term president who has co-opted or crushed any substantial opposition in his home country. In a statement, the former foreign secretary David Miliband, who has backed a second referendum, said it was “an insult to the United Kingdom that he should be lecturing us on our democratic process”.

Russia is seen as a possible beneficiary of the UK’s exit from the EU, and a prominent financial backer of the leave campaign, Arron Banks, met Russian embassy officials repeatedly during the run-up to the referendum in June 2016.

Putin found Trump's decision to pull US forces out of Syria pleasing if not somewhat unconvincing.


Putin also backed Donald Trump’s sudden announcement of a troop withdrawal from Syria, calling it the “right decision”, but added that Russia had not yet seen evidence of a drawdown.

“The United States has already been in Afghanistan for 17 years, and almost every year they say they’re withdrawing their troops,” he said.

Although Vlad's motives are suspect to say the least, I can't fault him for backing Trump's pullout from Syria. As for A-stan, remind me again, what is the US doing there? Other than turning the country into the world's biggest heroin producer, the US hasn't accomplished much.

When ISIS attacked the Syrian government , they became American allies in the plan for a coup to replace Assad . ISIS was backed by Israeli money buying them American weapons laundered through Saudi Arabia. Turkey, of course, played both sides wiggling for advantage. Somewhere is this mess it was all about US,SA, Israeli enmity towards Iran.

it is not surprising that Vlad is taking such an interest in British democracy. After all, his operatives put great effort into manipulating it during the lead-up to the Brexit vote.

For those to lazy to read, Trump’s Treasury has agreed to lifting Sanctions on 2 of Derp’s Companies, because his ownership of those two cash cows are being lowered below 50%, by transfering ownership shares to two other Sanctioned Companies.

The Royhinga/SFA part of the Operation Inherent Resolve is the only part that has gone “well”. That’s because the Royhinga built their own Amry, defences, economy and government long before “we” got involved, and the Royhinga Kurds are as fanatical fighters as ISIS. It was the Royhinga and the PKK who started rescuing the Yardzi’s, weeks before the genocide of the Yardzi’s became a “thing”.

After Bush blew the First Loya Jurga, by handing Afghanistan back to the same Northern Alliance who had broken it, the Surges proved the Talib could not be defeated, the Afghan Factions proved that they had no interest in a working Afghanistan, and the IC proved that building structure Afghanistan actually needed was not a priority, PR Puff Projects were,

The current “plan”, if you can call it one, is keep the “Afghan Government” propped up as long as we can, until all sides get tired of the fighting and work out an agreement.

The fighting in and around Manjib puts much of the situation in Afghanistan into a nutshell.

Every post of yours reminds me how effective Russian Active Measures against social media has been.

Yup, and we’ve got a Federal Election upcoming.

Looks like it’s Trump Towers Turkey and the Kurds are being handed off to Ergodan for slaughter,

Leaving nobody semi sane in the White House and nobody standing between the Insane Clown POS us and new wars or the nukes.

Oooh, scary! A scathing resignation letter, what a hero! Not exactly Operation Valkyrie, is it?

Mattis is just an opportunist like the rest of them. He's jumping ship now that the cost of his current opportunity outweighs the benefits. He'll be remembered as a Trump enabler, his reputation forever tarnished by association.

So Trump makes a stance against US military-financial-industrial complex which brought death and destruction to half the globe over the last century.
Merry Christmas to All.
PEACE an JOY.