Is the Monroe Doctrine Dead? 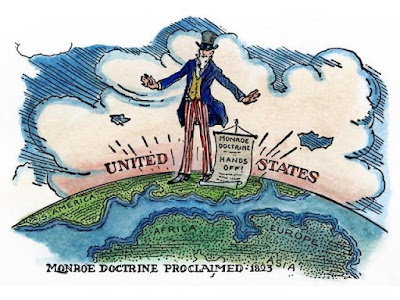 For almost two centuries, America has considered the Americas, especially Central and South America, off-limits to foreign meddling. At first the concern was ambitious European states.  The US pledged not to meddle in European affairs in exchange for the Euros reciprocating in the Americas. This resulted in the spread of American hegemony from its border with Mexico to Tierra del Fuego. The Latins would still have plenty of meddling, just not from Europe. We know how that turned out.

Now the Monroe Doctrine is imperiled, not by any European state, but by China. While America snoozed, disinterested, China has been pursuing a little hegemony of its own - in Asia Pacific, South Asia and the Middle East, Africa and even South America. It's said that the two largest banks in South America today are both Chinese.

But what about Central America? Well, since you ask, there's news. Mexico, tired of being roughed up by Trump, is openly tossing around the idea of a Chinese option for dealing with Central America's endless troubles.


Instead [of constant bickering with Trump over migrants], they want to change the focus of the conversation to developing the economy of Central America, creating jobs there so people do not have to stream north in the first place.

And how does López Obrador's new government hope to convince Trump that he should care about investing in Central America?
Enter China, or at least the perceived threat to the United States posed by its growing engagement in the region.

While it is unclear whether Chinese interests would include supporting a plan to curb migration out of Central America, in recent years the country has increased its presence there, funding infrastructure projects, tightening ties with governments and even convincing a handful of Central American nations to switch their diplomatic recognition of Taiwan to China — a sticking point with the United States.

By privately raising the prospect of China assisting in the new regional development plan, Mexico is trying to leverage the region's changing reality in its favour, given that it cannot take cooperation with the United States for granted.=

"For a long time there has been this competition within Latin America for influence, where China is willing to invest billions in infrastructure and energy that the United States simply isn't," said Duncan Wood, director of the Mexico Institute at the Wilson Centre.

The approach is also a reflection of the distinct personalities of López Obrador and Trump: Both are mavericks — albeit on opposite sides of the political spectrum — and both are willing to break with long-established conventions.

Unlike his predecessor, López Obrador is willing to chart an independent course in his response to the Trump administration — partly because of Trump's hard line on migration and partly out of a conviction that the only way to tackle the issue is to go after its root causes.

... "If nothing else, it is a good bargaining chip," said Doris Meissner, a senior fellow at the Migration Policy Institute in Washington, of the idea that China could increase its investment in the region. "Both sides are laying down their frameworks and their points of view as to how they should they proceed."

The idea that China could increase its influence in Mexico emerged even before López Obrador came into office.

"I heard from senior Mexican officials during the transition that if the United States is not going to treat Mexico with respect, don't be surprised if you see a Chinese submarine in a Mexican port," said Juan Gonzalez, who was an adviser to Vice President Joe Biden on Central America.

"I think it was hyperbolic," he said of the outgoing officials' warning before adding, "I think Mexico sees increased political risk coming from the political process in the United States and they are diversifying their interests."

It is an inevitable aspect of dominant power transitions that the rising power displaces the reigning power abroad, something the United States is now realizing.

Beginning in 2007 Washington realized that it was in danger of losing hegemony over Africa.  To this end the Pentagon set up a new command, AfriCom.

A week after Chinese President Hu Jintao began a high-profile, eight-country African tour, during which he signed more than 50 cooperation agreements and pledged to double China’s assistance to Africa by 2009, Bush announced the creation of AFRICOM.

The Chinese moves have Bush's neo-con faithful doing it in their pants. The neo-con Heritage Foundation issued this warning: “The United States must be alert to the potential long-term disruption of American access to important raw materials and energy sources as these resources are ‘locked up’ by Chinese firms.”

The US projects that African petroleum could make up 25% of America's oil imports by 2015. That is unless China gets that oil that it too desperately wants locked up before then.

Now, as for AFRICOM, US officials have said it "..isn’t about chasing terrorists around Africa”; “AFRICOM isn’t going to be used to protect natural resources”. Strangely enough, they haven't actually said what AFRICOM is about. Go figure.

In 2008, the United Nations said the supposed humanitarian focus of AfriCom was nonsense.


The United Nations Office for Humanitarian Affairs, in a move destined to set the Pentagon and White House wolves howling, has come right out and said that AfriCom's focus is military, not humanitarian:

In a key briefing to Congress on 13 March, General William “Kip” Ward, head of the US Command for Africa, AFRICOM, devoted only 15 seconds of his four-and-a-half minute opening remarks to a possible humanitarian role.

Focusing instead on military training, security and counter-terrorism, his remarks came in sharp contrast to a year ago when officials announced that the command would concentrate on humanitarian assistance, alarming many aid agencies, which were concerned that US military involvement in humanitarian aid would undermine their neutrality.

Now, with its fracked oil and gas bounty, the United States military presence is limited to a forlorn base in a container port in Djibouti situated immediately alongside a similar military base, this one Chinese. The Washington Post recently asked whether China could bump US forces out of that solitary toehold.

The good news is that Trump has sparked an overdue debate about America's place in the world.


To be sure, discussions about the waning of the United States as the world’s sole superpowerpredate Trump. But two years of his tumultuous presidency have intensified Washingtonian angst about the future of American power and how America should seek to lead a more fractured planet — or whether it should try at all.

“It’s historical fact that great nations and empires all have a beginning and an end,” said James Jones, a retired U.S. general, former national security adviser to President Barack Obama and outgoing chairman of the Atlantic Council, speaking Friday in Washington at a forum hosted by his think tank. “There’s a naive belief in our country that there’s some sort of destiny, that the primacy of the United States is ensured for some reason forever. I don’t think that’s the case.”

To that end, the Atlantic Council, an organization deeply invested in the furtherance of American leadership, is planning on floating a new set of principles to safeguard the “rules-based order” — the euphemism often used to explain the status quo authored by the United States more than half a century ago. It wants to “revitalize” and “defend” this order, not just from the rising authoritarian might of China, but in the face of Trump’s own nationalist and protectionist agenda and those of his ilk.

At the forum, speakers warned of the White House’s disregard for “values-based” foreign policy — seen both in Trump’s cynical accommodation of figures such as the Saudi crown prince as well as his demagoguery over migrants and refugees coming to the United States. Washington, they feared, was seeing its credibility evaporate among allies.

...That the United States is almost inexorably lurching into a great-power confrontation with China ought to be a concern, suggested Emma Ashford and Trevor Thrall of the libertarian Cato Institute. “The growing consensus on China is troubling. Having identified China as America’s biggest strategic challenge, neither party has identified a clear goal,” Ashford and Thrall wrote. “Nor have they articulated how a new approach to China would provide a foundation for a broader vision of American foreign policy . . . The risk of creating a self-fulfilling prophecy on China — through confrontation without purpose — is real.”

Analysts liken the febrile moment to an earlier era of 19th century politics, when Europe’s industrializing, imperial powers entered into alliances that ultimately convulsed the world into conflict.

“What we are seeing today resembles the mid-nineteenth century in important ways: the post — World War II, post — Cold War order cannot be restored, but the world is not yet on the edge of a systemic crisis,” wrote Richard Haass, president of the Council on Foreign Relations.

A century ago, that crisis arrived. This time, the current crop of American politicians — Trump included — can still stave off calamity.

“Now is the time to make sure one never materializes, be it from a breakdown in U.S.-Chinese relations, a clash with Russia, a conflagration in the Middle East, or the cumulative effects of climate change,” Haass continued. “The good news is that it is far from inevitable that the world will eventually arrive at a catastrophe; the bad news is that it is far from certain that it will not.”

The recent developments of US policy toward Canadian relations with China can probably be explained by this. The US can force Canada out of the USMCA deal if Canada pursues deals the US doesn't like, and the Huawei case. Trump's people really do not want Canada cozying up to China. There'll probably be more events coming from the anti-Chinese in Trump's cabinet in order to further schism Canada and China. Well, it's better not to consider these people anti-Chinese. They're imperialists who want China's economy/market opened up to US influence. Libertarian imperialists, which is a weird combination, but if Bannon's recent comments over the Summer are to be believed, that's what they believe: the US will "defeat" the Chinese in a trade war.

I wonder how the Chinese discount the prospects of Trump winning a second term. The possibility of not having to deal with Trump much longer should be a significant factor in Chinese policy.