Unless you're America's twitmeister in chief, the Mango Mussolini himself, Donald "On the Run" Trump.

Yesterday, Trump the Lump tweeted to his faithful followers: “Democrats can’t find a Smocking Gun tying the Trump campaign to Russia after James Comey’s testimony. No Smocking Gun… No Collusion.”

A Smoking Gun indeed. Mia Farrow responded with this: 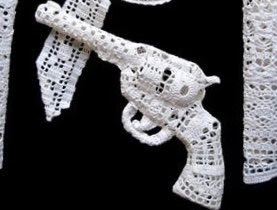 The man's too dumb to be embarrassed.


I don't know how dumb he is, Owen. Is he a non-stop "senior's moment"? Lately I've come to suspect that his constant lying isn't to deceive others but to deceive himself. He needs such a contrived narrative to keep going. Not all the plugs in his skull are firing.

The saddest thing is that on an NBC report I saw, the newsreader read it as "smoking." I didn't know it was the media's role to cover for the Idiot-in-Chief.

That does surprise me, Lorne. Why would they do that?

.. Trumph is an interesting specimen. There's a certain 'idiot savant' asspect (sic) but questions remain regarding who also contributes, creates or shapes his tweets. The likely suspects are motormouth himself - Sean Hannity. Another of course is Stephen Miller, the Waffen SS droog. Bannon still advising from deep cover ? Surely Ms Huckabee Sanders must be considered, she resculpts the daily or nightly excrement that the Donald emits.

This is probably a topic or forensic gaming challenge that Belling Cat might be amused to solve. They would harness social media and quickly identify mannerism, spelling gaffes, poor context and hysterical failures etc.. and seperate the authors. Most are childish (apologies to children!) idiotic lashouts, diversionary nonsence from the President Of The United States (hard as that may be to believe) - but some are likely topical fill ins from the above likely suspects. It also hard to believe some of these are crafted or sent from golf carts, sandtraps, the breakfast, lunch or dinner tables. The ruining of the country cannot be his whole or partial reason to bother remaining alive.

Its my belief its not truly sunk in that he cannot 'take it with him' - that there will be no clone of Ivanka awaiting his limp wick in the valhalla of fraudulent commercial realtors. On the plus side, he won't leave the earthly domain with his debts, markers, indescretions, bankruptcies or bone spurs. Robert Mueller will be unable to persecute him further for his conspiracies, nor for his idiocy.

His children and wives will bear the burden of scorn, eternal emnity, and riducule.. the 'brand' a ludicrous toxic butt of jokes. Trump is and will be a fresh version of Benedict Arnold, Sirhan Sirhan, General Custer, John Wilkes-Booth, Lee Harvey Oswald et al. America had to wait since Nixon self destructed.. but here cometh the new villain ! The new champion of loserville, back from the bewilderness !

Presumably.. Custer's last correspondance might foreshadow the contemporary mindlessness of Trump.. No doubt Custer wrote to his beloved, or mistress if any, regarding his latest conquest of the savages & plans for further exterminations .. ah.. but just over that rise.. surely some more bad injuns to subdue ! Charge ! !