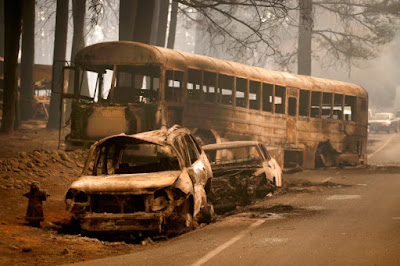 The massive wildfire that devastated the town of Paradise, California last month might be just an introduction to our new normal.


Ruth McLarty, an experienced surgeon, was fairly certain she was about to die in a particularly grisly way. Surrounded by a hellish inferno of burning trees and cars, McLarty reasoned the flames would engulf her long before the smoke could choke her to death.

Trapped in nearby vehicles, some of McLarty’s colleagues made similarly macabre calculations. Two nurses, stuck in the back of a stalled police car, contemplated shooting each other. Another nurse rolled down her window and gulped in the smoke. McLarty edged her car away from a burning wreckage, fired off some final messages to her sister and called her daughter, who said she could hear the roar of the blaze over the phone.

“Once you feel heat, you know that your car can’t last very long,” said McLarty, a slight, deliberate woman who, little over an hour previously, was in a hospital conducting a gallbladder operation when she was told to evacuate.

“You can hear other people’s cars blow up. I grew up thinking that when people died in fires, they died from the smoke and so they didn’t really suffer. But I’m thinking ‘this is coming fast enough … I don’t think that I’m gonna die from smoke.’”

As McLarty arrived at this grim conclusion, a bulldozer emerged from the sun-blotting pall of smoke and shoved an abandoned car off the road, opening an escape path for McLarty and a few others to dart to safety in a nearby field. “This poor man. I mean, he’s just driving to his death, and they cleared a path,” McLarty said. “It was apocalyptic.”

85 dead, dozens missing. 9 out of 10 homes mere ashes, some with bones still undiscovered.


The visceral trauma of having a town wiped off the map is the nadir in an astonishing burst of recent wildfires – of the 10 most destructive fires in California’s recorded history, five have occurred since October last year.

“The landscape is changing into the appropriate climate zone that we are moving towards,” said LeRoy Westerling, a climate change and fire expert at the University of California, Merced, who attempts to work out how wildfires will spread as temperatures continue to rise. “The fires seem to be outpacing our predictions. The Camp fire shocked me by how fast it was.”

Along the west coast the wildfire season grows longer and longer, no longer just a seasonal affliction, fires reaching from the US-Mexican border into northern Alaska.

To the fossil fuel barons and their dutiful stooges in our legislatures and Parliament, this is what you're bequeathing us with your insistence on flooding world markets with the filthiest, highest-carbon ersatz petroleum on the planet.


Something on the scale of the Camp fire, where a funnel of flame seared through a town in a few hours, could’ve conceivably occurred 50 years ago but it would’ve involved a “very unlikely sequence of climate events you wouldn’t see again”, Westerling said.

“Now we are seeing it happen again and again, year after year,” he added. “The climate will continue to warm and will continue to surprise us. No one alive today will ever see a stable climate system again. This is going to be changing for the rest of our lives.”

...“A whole bunch of fires have piled on to the top of each other and haven’t stopped,” said Scott McLean, deputy chief of Cal Fire, who oversaw crews working 24-hour shifts during the fight to save Paradise. “I grew up in this state and you’d never really get fires like this in November or December. We’re now fighting fire all year round. There’s no fire season any more. People are tired. It’s a constant battle.”

...The situation is set to become worse. An exhaustive climate change assessment by the US government predicts the area of the western US consumed by wildfire annually is set to double, or even increase sixfold, within 30 years as the planet continues to warm.

America's Nero dismisses climate science out of hand with a curt, "I don't believe it." Canada's prime minister is quite the opposite. He says he gets it but then he goes back to driving a massive bitumen pipeline across the very lands of people who live under this new wildfire nightmare.

Top climate scientists have been clear about one thing for years. The only chance we have of averting runaway climate change lies in the "induced implosion" of the fossil fuel industry. Fossil fuels, especially the highest carbon stuff - coal and bitumen - must be left in the ground. What are the chances of that when our prime minister is bent on constructing a multi-billion dollar, 60-year pipeline from the Athabasca bitumen pits to "tidewater"?
Posted by The Mound of Sound at 5:42 AM