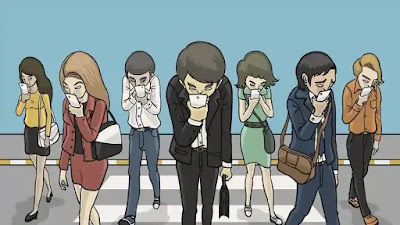 We can all do to expand our vocabulary. It's a lifelong quest. So how about the Cambridge Dictionary's Word of the Year - "nomophobia."

Are you feeling a touch nomophobic? Is it a recurring problem? Is your nomophobia perhaps interfering with your sleep?

By now you're probably heading for the Google or just going WTF? Okay, here goes:


"Nomophobia" is not a commonly-used word, and rarely appears in print: of the several hundred thousand articles published in Salon, it has appeared only once in print (in 2015); in the New York Times' history, it has appeared only four times. Nomophobia, according to Cambridge, is defined as the “fear or worry at the idea of being without your mobile phone or unable to use it.”

As Cambridge explains, the fact that nomophobia was the chosen word indicates that readers are familiar with it, or at the very least, can relate to it. This speaks to how deeply embedded in our lives mobile devices have become. As anyone over 20 knows, it wasn’t that long ago humans were able to leave the house without a phone.

“Your choice, nomophobia, tells us that people around the world probably experience this type of anxiety enough that you recognized it needed a name,” Cambridge stated in a blog post. “Like many modern coinages, nomophobia is what’s called a blend: a new word made up of syllables from two or more words, in this case ‘no mobile phone phobia.’"

Surprisingly, psychologists weren’t the first to use the term. YouGov researchers first used it in 2008 in a report commissioned by the United Kingdom Post Office. The study found that 53 percent of mobile users felt anxious when they were unable to use their mobile devices. More than half of teen users who were surveyed cited that they never shut off their phones. One decade later, and it’s a “word of the year."