With One Foot in the Bunker Already, Trump Needs a Tough-Minded Chief of Staff. 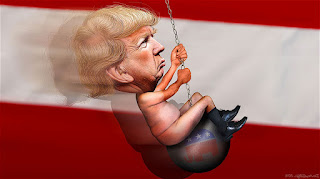 The "stable genius" of the Oval Office is shopping for a new chief of staff. The current placeholder, retired general John Kelly, is leaving in just a couple of weeks. It's hard to imagine Kelly being upset about taking his leave from the Asylum for One, a.k.a. the Trump White House.

Kelly, like former state secretary Tillerson, clashed with Trump, especially when the latter's instincts ventured into illegality.  Kelly also knew Trump's tendency to agree with whomever he last had his ear and built a corral around the dissolute beast to staunch unwanted access.

By many accounts, Trump has become something of a haunted man. He too senses that special counsel, Robert Mueller, is closing in. Perhaps Trump can feel Mueller's hot breath on his neck.

Now, more than ever, Trump needs a steadying hand but he's shown no sign of wanting that, just the opposite. Prudence was not foremost in Trump's mind when he brought the bellicose John Bolton aboard as his national security czar.

Who wants to bet what sort of chief of staff Trump wants next? Think he wants another disciplinarian, one who will keep his truly base instincts in check? What fun would there be in that?

UPDATE:  It's getting worse for that silly bugger all the time. Trump had his eye on Mike Pence's chief of staff, Nick Ayers, to fill Kelly's slot. Nick has turned Donald down. Apparently he's looking to get himself and his family out of Dodge, pronto. Betcha Trump wishes he could do the same.
Posted by The Mound of Sound at 1:38 PM

Trump could get out of Dodge, just by resigning.

Trump's never been in control of his own staff, swinging wildly from new money libertarians to neo-conservative ratfuckers. The latter have won out entirely, and will probably get one of their boys into Kelly's position.

The next two years of US politics will be even more annoying until hopefully the Democrats nominate somebody people'll actually get out to vote for.

Resigning would actually imperil Trump to being charged. He's currently protected by the fact the President is governed by both Congress and the Senate, and thus the Justice Department would refer any charges to these institutions rather than trying the President itself.

Even if Congressional Democrats bother to vote to impeach Trump at the recommendation of Mueller (which Democratic leadership has shown no inclination for doing), such a vote still has to pass through the Senate, which is controlled by Republicans. And the Republicans are deathly afraid of crossing Trump who controls Republican campaign finances.

He's better off trying to get himself re-elected in 2020, as the statute of limitations for the crime he is accused of committed is five years, although the USA would be worse off if he does get re-elected.

Whether Republicans manage to regain control of their finances and bar Trump from running in 2020 is another question entirely. Hopefully? But I honestly hope for liberals to retake the Republican Party from the neo-cons that've dominated it for the past two decades.

Troy, what perfect timing. Tell me what I need to know about Kanahus Freedom Manuel. There's a video on YouTube of her being confronted by a threatening truckload of Alberta snowmobilers in Blue River. What is "Tiny House Warriers"? Can you tell me what is really going on there?

The Manuels are far more courageous and radical than I am.

Oddly enough, I've never visited the camp despite traveling the Secwepemc nation back and forth twice in the past two years.

Haven't met her personally. Or I may have, and not known her by name. I know her brother, but haven't spoken with him in years, as we move in different circles. I was also friends with her late eldest brother.

To know a Secwepemc, know their antecedents: https://indigenousfoundations.arts.ubc.ca/george_manuel/

Kanahus Freedom Manuel is descended from George Manuel, a former Neskonlith chief, who is celebrated among the Secwepemc for protesting Trudeau's White Paper policy, creating the term "The Fourth World", and for his leadership of organizations such as North American Indian Brotherhood of BC and the Assembly of First Nations.

Her father, Arthur Manuel was also a chief of Neskonlith, and quite an activist in his own right, developing methods of resistance and creating and updating much of the language used in modern Secwepemc protest.

The Manuels are really quite a brilliant family. I deeply admired Kanahus' late brother, and with his passing I burned out from politics, which explains when I took down my old blog.

To know the Manuels, you should understand the Secwepemc too (pp 8-10): http://www.kanakabarband.ca/downloads/memorial-to-sir-wilfred-laurier.pdf

Such is an old document, but it lays out much, perhaps even all, of the Secwepemc grievances with the Canadian and British Columbian governments.

As for the Tiny House Warriors:


Thanks, fella, I'll go through those links.

Thanks Troy. I hadn't thought of that.

Thank you for sharing
https://aab-edu.net/