Pushback Over Steve Bannon's Ploy to Infiltrate the Catholic Church 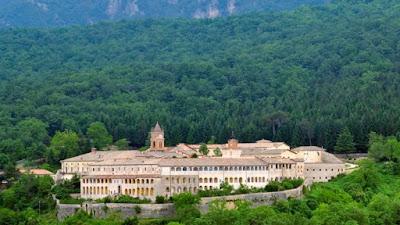 Steve Bannon has hopes of turning a former Catholic monastery into a training camp for Europe's rightwing.

He was born into an Irish-American family and was raised a Roman Catholic. He attended Benedictine College Preparatory, a private, Catholic, military high school in Richmond, Virginia before moving on to Virginia Tech and then a commission in the US Navy. Steve Bannon remained a relative unknown until he was propelled into the limelight as he resurrected Donald Trump's faltering presidential campaign.

Bannon joined the Trump campaign in August, 2016. His tenure in Trump's White House ended a year later, in August, 2017, when he was shown the door.  For most of this year Bannon has been knocking around Europe's various rightwing populist parties.  Now he's trying to set up an academy to groom the next generation of rightwing populist leaders out of an old monastery in south of Rome.


...now, only one 83-year-old monk remains. A longtime chef-gardener still lives there, as well, along with several dozen feral cats. The other resident at Trisulti is the newcomer: a 43-year-old Briton who is one of Stephen K. Bannon’s closest associates in Europe and who hopes to transform the monastery into a “gladiator school for culture warriors.”

One recent morning, Benjamin Harnwell, the Bannon acolyte, grabbed his ring of keys and moved from one building to the next, through hidden passageways and into frescoed rooms, where he said the next mission at this site was about to take form.

Soon, he said, the monastery would be filled with students who wanted to master the tools of populist politics. The halls with centuries-old oil paintings would serve as classrooms where students could learn “the facts” — the worldview espoused by Bannon, who, since being booted from the White House and Breitbart News, has turned to fomenting right-wing populism in Europe and beyond.


Steve Bannon thinks big, really big. So when he decided that he wanted to revive Europe’s Christian roots it was no surprise that he set up his base of operations in an 800-year-old monastery in the mountains of central Italy.

The former Trump strategist has already launched the so-called Movement to unify Europe’s populist parties, but influencing the politics of the Continent is not enough — he is now determined to save its soul.

Trisulti monastery, south of Rome, was picked as the place to do it — a 100-room complex founded in 1204 near an alleged apparition of the Virgin Mary, where professors selected by Mr Bannon will teach conservative Catholic values to as many as 300 students, starting next year.

But Bannon's plans to open a populist "gladiator school" are being met by protests.


Steve Bannon’s plan to teach Catholic values at a remote 800-year-old monastery in Italy has been criticised by protesters who claim he is dragging Europe back to the Middle Ages.

About 300 people marched near the Trisulti monastery, south of Rome, at the weekend carrying a banner stating “Stop Bannon — Free Europe”. Mr Bannon, President Trump’s former strategist, plans to open a “gladiator school” in the 100-room complex as part of his drive to revitalise Europe’s Christian roots.


In September it was reported that Bannon was plotting with rightwingers in the church hierarchy to force Pope Francis to resign.
Posted by The Mound of Sound at 2:27 PM

How come the noble word "populism" is now not kosher?


Like nationalism, populism comes in two flavours - positive and negative. Positive nationalism and populism are internal. They celebrate what makes the nation worthwhile, even great, but not in the context of foreign adversaries. They are not framed in opposition to other nations or other people, faiths or ideologies.

Rightwing populism, by contrast, is based on "the other." It perceives a response to threats, real or, more often, imagined, hyped. It's profoundly negative.

Progressivism is a form of populism, a populism of the left. You can get a sense of it and see how it differs from today's rightwing or negative populism by reading Teddy Roosevelt's 'new nationalism' or 'square deal' speech: http://teachingamericanhistory.org/library/document/new-nationalism-speech/

I should add that rightwing or negative population incites, inflames and exploits public fears, suspicions, biases and anger. It feeds off the base instincts it stirs up in its supporters.

It's in the playbook of every demagogue in history. What the despot's faithful never grasp, until it's too late, is that it is a weapon wielded against them by the very person they follow.

Think of Trump's fearmongering - Mexicans = rapists, Muslims = terrorists - and then compare that to Franklin Roosevelt's assurances to the American people after Pearl Harbour, "We have nothing to fear but fear itself."

Negative populists tear down their followers and divide their people. Positive leaders build them up and unite them. Trump is profoundly negative, mainly because it works so well with his Gullibillies. He's never short of somebody to blame when he fails. He never admits mistakes. He never takes responsibility. What kind of people see in such a flawed psyche any trace of leadership? I used to think that sort of thing was an affliction of North Koreans.

My guess would be Putin through various donors, including "Luca Volontè, an Italian politician who has been accused of accepting millions in illicit funds from figures connected with Azerbaijan."

With any luck the venture will be as successful as Trump University.

Thanks, Cap, and a healthy and happy 2019 to you. I'm guessing it's going to be a barn burner bringing a lot of shifts and surprises, some of them perhaps welcome. Interesting times indeed.

Russians have put a lot of effort into Right Wing Nut Job politics lately. They have had success with Brexit, Trump, LePin , etc. This is probably the same situation.

Here's hoping for a safe and sane year.

Bannon's pivotal idea is to use popular "uprising" to fight (and replace) elites which are currently firmly in control of US, Canada and to a lesser degree some countries of EU.
The same elites which deliberately gave us disasters of Afghanistan, Iraq, Libya, Syria, as well as, Reaganomics, war on terror, migrant crises and collapse of global markets in 2008.
Trump was Bannon's wrecking ball to get the process going and that wrecking ball now operates (quite efficiently) on its own without external input.
I have read 'square deal' speech once more to confirm again that the central thesis of the text is the transfer of command of US from the elites to the populace. Sounds to me like Bannon.
Finally, the issue of xenophobia is just a red herring waved by the elites.
Last but not least, I am not troll, not on anybody's payroll and I am really astonished that so many folks are rooting for those mafia-like elites.
Happy (hopefully less elitists) New Year!

'Think of Trump's fearmongering - Mexicans = rapists, Muslims = terrorists - and then compare that to Franklin Roosevelt's assurances to the American people after Pearl Harbour, "We have nothing to fear but fear itself."'

Free-tree, open-border globalists have their vision: unfettered flows of economic migrants and investment in and out of the country (export factories, jobs and GHG emissions; import foreign workers and foreign debt from fascist oligarchs.)

They say people who have ANY varying opinion on the issue are racists and fascists – even though free trade globalization turns global civilization into a racist concentration camp that puts People of Color around the world under the boot of oppression. It has even brought back slavery – including a burgeoning international sex-trafficking industry. (Honest Abe rolls in his grave.)

Some say democracy is populist. If the High Born have some agenda, they have to put it by the people first. To me, this is a system that has checks and balances in a world filled with corruption and incompetence.

A 'new world' neocolonial order – same as the old-world colonial order – does not trump constitutional democracy. It does not make the world a better place. It does not better the human condition. If anything, it's spreads rot and evil across the globe putting EVERYTHING at the brink of collapse.

"The revolution will not be televised. It is a revolution of the mind."

I heard it was George Soros and the Koch Brothers. Emperor Xi is in on the action too! Plus the military-industry-complex and the healthcare insurance industry. Mountains of good money flowing around making America and the world a better place! (Brings a tear to me eye!)


Well the alt.right crap is flowing freely around here today. It's not vision that makes your type bigots. It's your bigotry. Be good little storm troopers and, as Bannon himself says, wear it as a badge of honour.

I don’t know whether this means anything as far as Bannon and the Mercers are concerned.

“Stephen Bannon, its former chairman, took Breitbart in the wrong direction. Now that Mr. Bannon has resigned, Breitbart has the opportunity to refine its message and expand its influence.”

I remember reading what seemed to be a stronger Mercer rebuke of Bannon around that time. But of course, the public face can mean nothing.

What is bigotry, again? Empty and hateful superiority based on reducing people to primitive and degrading stereotypes.

As the Lord Jesus said,

"First take the plank out of your own eye, and then you will see clearly to remove the speck from your brother's eye."

One could argue the fanatical and hypocritical virtue-signalling of the cultural Left is outright Orwellian.

E.g., someone citing the 'N-word' will "suck the oxygen out of the room"; yet these same people treat People of Color like the servant class whom they consign to crime-ridden, inner-city ghettos (they starve of infrastructure and education funding) and private prison sweatshops.

Physician, please, for the sake of all your victims around the world: heal thyself. Please achieve something more than pretenses. Man cannot live on lies alone.