Arch-Repug George Will Wants US Out of Iraq and Afghanistan 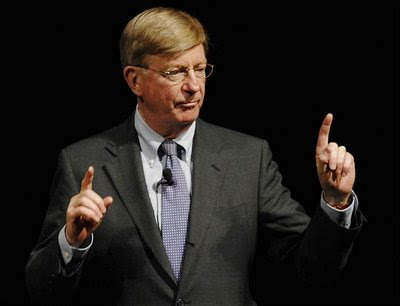 When rightwing pundit George Will begins calling for America to quit Iraq and Afghanistan, maybe it's time to check Washington's water supply. But that, according to a piece in TruthOut, is precisely what Will wants right now:

On September 1st, The Washington Post carried an article by George Will titled "Time to Get Out of Afghanistan." Three days later, Will published a second article titled "Time to Leave Iraq."

In his out-of-Afghanistan article, Will argued, "America should do only what can be done from offshore, using intelligence, drones, cruise missiles, airstrikes and small, potent Special Forces units, concentrating on the porous 1,500-mile border with Pakistan, a nation that actually matters." This should be done, he concluded, so no more valorous American soldiers die over there.

In his out-of-Iraq piece, Will contends that, "Nations which suffer civil wars as large as Iraq's was between 2004 and 2006 have 'a terrifyingly high rate of recidivism.' Two more years of US military presence cannot control whether that is in Iraq's future. Some people believe the war in Iraq was not only 'won' but vindicated by the success of the 2007 US troop surge. Yet as Iraqi violence is resurgent, the logic of triumphalism leads here: If, in spite of contrary evidence, the US surge permanently dampened sectarian violence, all US forces can come home sooner than the end of 2011. If, however, the surge did not so succeed, US forces must come home sooner."

It's enough to make any left-leaning opponents of the Iraq and Afghan wars want to re-think their position on the whole thing. It is refreshing to see so blunt an assessment regarding military withdrawal appear in The Washington Post, one of the most vociferous cheerleaders for both Bush-era boondoggles, but coming from Will it all rings more than a little hollow.

Hmm, I wonder if Harper reads The Washington Post?
(photo caption - Will always seeks a second opinion on which way the wind's blowing)
Posted by The Mound of Sound at 10:28 AM