Yeah But Did They Use a Fact-Checker? 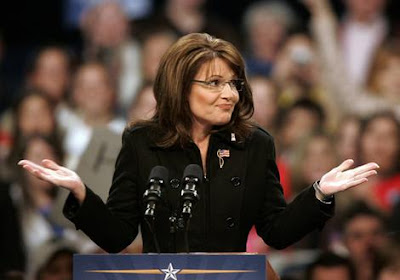 Sarah Palin's memoir, you bet'cha. Comin' out in November, don'tcha know. She's fixin to tell us her whole life story and it's bound to be a good one - story that is, as in tall tale.

Now we know that Sarah isn't the sharpest knife in the drawer. That she made it to the drawer at all was due to a chain of flukes. Sarah may be the darling of America's radicalized right but, like them, she can be a stranger to truth and reality.

I'll tell you who will be snapping up advance copies of her tome - anyone interested in the Republican nomination in 2012, that's who. They'll be parsing every phrase, dissecting every claim, preparing themselves to slice and dice her into slaw during the drawn out nomination campaign.

everybody's gonna buy this book... just for laughs, curiosity, and xmas gifts.
i doubt if tina fey will do a repeat.the media and blog world will be so active, expect crashes?