Is our paramount ally, the United States military, boosting our image as Crusaders in the Muslim world, particularly in Iraq and Afghanistan? Chris Roda, in a piece in today's AlterNet, makes the case that our ally is shoving Christianity down Muslim throats, providing invaluable propaganda to Islamist extremists.

One clip from Roda's article is this video of a fundamentalist preacher in Iraq praising the Lord for meeting his soldiers' prayers for bibles in Swahili. Really, Swahili.


Now it should come as no surprise that Swahili is not a language indigenous to any part of Iraq. In fact, here is a map of just where Swahili is spoken: 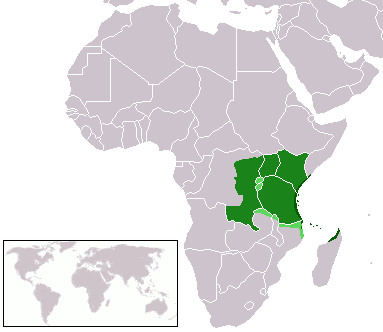 The story is weird, but maybe for different reasons than you think. This story says that the bibles are to convert Ugandan aid workers in Iraq.

This story talks about Ugandans who are recruited by the US to work as guards in Iraq, and abuse they are suffering there. Why Ugandans? The article says, “Ugandans guard US military bases, oil fields, airports, highways, towns, water and electricity installations... For this work, they earn US$1000... On the other side, the other nationals doing similar work get US$4000.”

You would enjoy reading Sharlet's piece in Harper's, "Jesus Killed Mohammed." It sheds a troubling light on the evangelical transformation of the US military. I wrote a post on it some time ago with a link to the article. If you want an eye-opener, read this: