How the Mighty Have Fallen 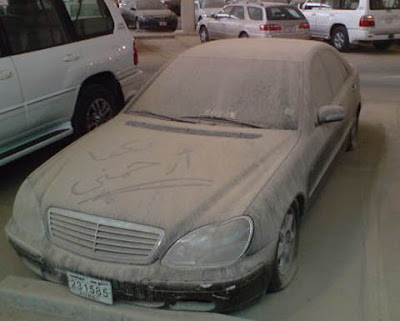 Dubai used to be the playground of the Middle East sporting enormous wealth and some of the most spectacular architecture on the planet. For a lot of ambitious Europeans and North Americans it was the place to be, emphasis on "was."

Dubai's prosperity depended entirely on its neighbours' prosperity. They have oil, Dubai has none. Dubai was literally fueled by their oil profits. Even since the global slump, however, Dubai has been running on empty.

A lot of those foreigners who thought the sky was the limit bought expensive cars and even more expensive homes that suddenly became much less valuable once Dubai's economy tanked. Now ultra-modern Dubai clings to some old ways, one of them is the Debtor's Prison for folks who can't pay their creditors. That caused a lot of Westerners to leave Dubai quite abruptly and with no notice. Dubai's airports and streets remain littered with very expensive cars, marques like Mercedez Benz, BMW and the like.

According to the local paper, The National, the abandoned luxury car problem has become so bad that new cars lose half their value the moment they're driven off the dealer's lot:

Last year, the value of a new saloon or 4x4 fell immediately after purchase by about 20 to 35 per cent. This year, the loss is between 35 and 55 per cent, according to Pradeep Ramakrishnan, the head of used-car operations at Swaidan Trading, the Peugeot dealer for Dubai and the northern emirates.“They have fallen drastically,” he said. “The market is very erratic but, basically, this drop is because many used cars are on the market.

...The fall in value of new luxury cars was even greater, he said – at least 55 per cent – because so many people wanted to get rid of them. That was confirmed when, in one day, The National spotted more than 60 cars, many high-end vehicles, abandoned on the streets of Dubai. Many had fines outstanding.

It's easy to tell the abandoned cars. In Dubai a car doesn't have to sit too long before it's covered in a tell tale coat of sand.
Posted by The Mound of Sound at 10:08 AM