Don't Allow the Slaughter of Anything More Intelligent Than Your Presidents 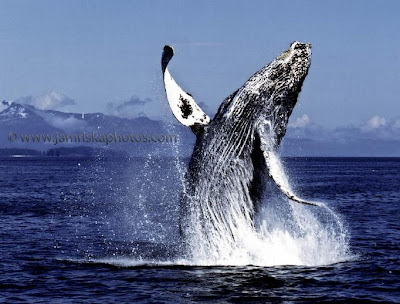 Thanks to George w. Bush, that would cover all species of whales and most primates, maybe even a couple of wallpaper patterns. Unfortunately America seems to be moving the other way.

The Environmental News Network reports that the U.S. National Marine Fisheries Service is moving to strip the humpback whale of its endangered species protection in the north Pacific.

Since an international ban on their whaling in 1966, populations of the north Pacific humpback have increased about 4.7 percent each year, researchers say. An estimated 18,000 to 20,000 humpbacks now exist in the north Pacific.

Oh great, we'll let the Japanese cull that herd when the herd that really needs thinning is us, mankind.
Posted by The Mound of Sound at 10:28 AM

Email ThisBlogThis!Share to TwitterShare to FacebookShare to Pinterest
Labels: whaling

It's time the world placed a moritorium on all fishing around the world now. While I was working in South Korea, a concerned Korean sent to me a video of the Japanese killing of porpoise. I couldn't finish watching it it was so horrible. Dragging live animals tied to trucks being dragged down the street from the vessels to the killing building. Babies crying for their mothers. Most Asians just don't care especially the Japanese. They are considered to be just animals and put there for their use to be used however. The world's population needs to drop to half now...it would be easier to educate.... and if I were one of those people at least I would be contributing to the restoration of the environment. A. Morris

Unfortunately fishing is the sole source of protein for most of the poorest nations on earth. Despite that need, it's the wealthy nations with their industrial fishing fleets that are largely responsible for fishing food species to extinction.

One reason the Europeans are seeing so many migrants from West Africa is because their own fishing fleets were pillaging the Africans' fish stocks. Once the Euros cleaned out their fisheries the Africans didn't have a lot of choice but to leave.

Humans are so bloody arrogant - we forget we are part of nature too and subject to the same laws as all the other species we are driving to extinction. When our species outgrows its' food supply, the result will be population control through mass starvation and disease. In the end, bacteria, not humans, are at the top of the food chain.