An Ounce of Prevention - Mike, Steve, Are You Listening? 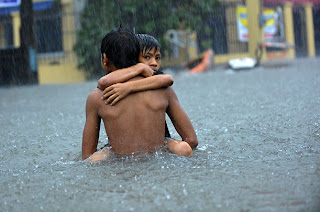 Two recent events have clearly demonstrated the essential need for climate change information and preparation. It saves lives, lots of them.

US Samoa was hit by a tsunami yesterday but the loss of life was greatly reduced by public awareness and planning. Now, obviously, the earthquake that generated the tsunami is not a product of climate change but the event does show how proper public education and planning can save lives.

The typhoon that struck the Philippines and Vietnam, Typhoon Ketsana, does make the direct case for climate change education and planning. The Philippines, which was struck first, was relatively unprepared and got hammered. Vietnam had a couple of days warning and, largely due to a properly informed and prepared public, was able to avoid massive loss of life:

Ngo Thi Thanh has weathered dozens of tropical storms and typhoons living in central Vietnam’s coastal region, but in her 60 years she has never seen the kind of destruction wrought by Typhoon Ketsana, which struck late on 29 September.

“It swept through just like an atomic bomb was dropped here,” says Thanh, who lives in Quang Nam, the hardest-hit province, on the south-central coast of Vietnam.

... Ugo Blanco, who is helping to coordinate the UN Development Programme’s response to the storm, says the casualty figures could have been much higher. “The typhoon was one of the worst in intensity, but not in terms of damage,” says Blanco.

This was because “preparation was very, very good. When the storm hit the Philippines it triggered preparations [in Vietnam]. Two hundred thousand people were evacuated. It saved many, many lives.”

In the Philippines where the death count already stands at 250 and the displaced number 730,000, Typhoon Ketsana has fueled demands for urgent action on climate change:

"The death, the pain and the damage in the Philippines help us to understand the necessity of an earnest negotiation," Heherson Alvarez, head of the Philippine delegation to the talks and presidential adviser on climate change, told reporters.

"We should cut deep and cut early in order to moderate these destructive typhoons," he said. "Think of Manila. Think of what can happen in this world." Alvarez said the Philippines experiences about 20 typhoons a year; they have been increasing in speed over the past 30 years from 100km to up to 200km per hour.

The Philippines is gathering scientific data to show the effects of climate change on the country, but Alvarez said there was evidence to show a correlation between an increase in the level of carbon dioxide, a greenhouse gas, and the severity of typhoons.

Graciano Yumul, under-secretary at the Philippine government's national Department of Science and Technology, pointed to changing weather patterns in the world's second largest archipelago nation, including rain during the country's normally dry summer months from April to June.

During summer this year, "a lot of people died because three typhoons hit the country. Summer is supposed to be dry, not wet," said Yumul.
Posted by The Mound of Sound at 7:46 AM

Even though I agree with the concept of this blog MOS; "there was evidence to show a correlation between an increase in the level of carbon dioxide, greenhouse gas, and the severity of typhoons," Heherson Alvarez is blaming climate change for the problems the Philippinos are facing.
I have to say having been there, the Philippino population needs to be educated regarding their environment. They have cut down their trees and this was the cause for mud slides. They treat the land without respect and their population is far to huge for this little country to sustain its population but the RC Church will continue to encourage them to have more children as God will provide. I am not trying to make light of climate change but we as individuals have to take responsibility for the way we have used and continue to destroy the land, the animals, the air and the water. Every little bit helps. A. Morris

Your points on overpopulation and ecological degradation are well taken.

You realize these places have yearly storms, and always have..

No Anon but that you so much for pointing that out. Who would have imagined? Yearly storms? And I thought only my own Vancouver Island actually got yearly storms. What an eye opener!