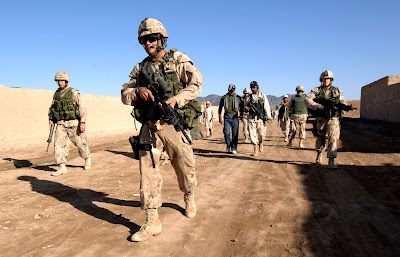 The Afghan War is a struggle for hearts and minds and, above all else, it's your heart and your mind that matter.

The challenge facing Western forces in the Afghan War is to wrap things up before they lose the hearts and minds at home. And they've had a damned good run - eight years now - and they've got little or nothing to show for it.

Our forces have all the jets and helicopters and tanks and heavy artillery. They simply cannot be defeated, militarily defeated, by a few thousand rabble armed with Korean War-vintage assault rifles. Can't be done, won't be done. That's why our forces continue to fight our type of warfare, military war. We're happy with that and so is the other side because they're not fighting a military war, they're fighting a political war. It's their war, the political war, that's going to decide the issue - eventually - and all they have to do to win is survive long enough to wait us out.

The Pentagon and NATO know they're losing the war for hearts and minds at home. Public support at home is faltering and in danger of collapse. We, unlike the Afghan people, have democracies and that means when we're finally fed up with a war that's going nowhere, it's over.

They try to keep this gin mill going by scolding dissenters with the line that failure is not an option. That's where they have it wrong, dead wrong. Failure isn't an "option," something we have somehow chosen. It is, instead, the result of their inability to prevail, the same result that inevitably befalls the losing side of any conflict. It's outrageous that these politicians and generals who have promised so much and delivered nothing attempt to set us up as choosing the inevitable result of their failure. They have failed the Afghan people, failed their own countries, failed their soldiers and now they have the gall to blame us for it. That's what you get from cowards, miscreants and reprobates.
Posted by The Mound of Sound at 10:53 AM