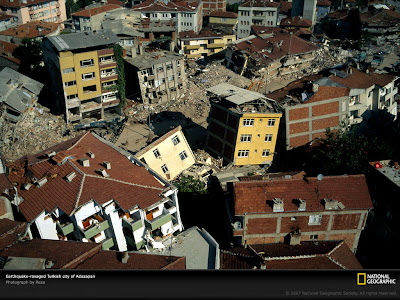 Around the world, native populations of low-lying islands are abandoning their ancestral homes, taking to their boats and sailing to higher ground. This is happening on a relatively small scale at the moment but the accounts have been coming in with sufficient frequency that they're no longer drawing much attention. We - have become resigned to - Their - fate. And so, climate change proceeds apace without causing much alarm or even notice where it matters, places like Ottawa and Washington.

A report to be released next week at the University College London's Climate Forcing of Geological Hazards conference, warns that global warming has a whole bag of nasty tricks that will indeed get our attention before long. From The Guardian:

Scientists are to outline dramatic evidence that global warming threatens the planet in a new and unexpected way – by triggering earthquakes, tsunamis, avalanches and volcanic eruptions.

...Melting glaciers will set off avalanches, floods and mud flows in the Alps and other mountain ranges; torrential rainfall in the UK is likely to cause widespread erosion; while disappearing Greenland and Antarctic ice sheets threaten to let loose underwater landslides, triggering tsunamis that could even strike the seas around Britain.

At the same time the disappearance of ice caps will change the pressures acting on the Earth's crust and set off volcanic eruptions across the globe. Life on Earth faces a warm future – and a fiery one.

"Not only are the oceans and atmosphere conspiring against us, bringing baking temperatures, more powerful storms and floods, but the crust beneath our feet seems likely to join in too," said Professor Bill McGuire, director of the Benfield Hazard Research Centre, at University College London (UCL).

...Last week scientists from Northern Arizona University reported in the journal Science that temperatures in the Arctic were now higher than at any time in the past 2,000 years. Ice sheets are disappearing at a dramatic rate – and these could have other, unexpected impacts on the planet's geology.

According to Professor Mark Maslin of UCL, one is likely to be the release of the planet's methane hydrate deposits. These ice-like deposits are found on the seabed and in the permafrost regions of Siberia and the far north.

...It was not just the warming of the sea that was the problem, added Maslin. As the ice around Greenland and Antarctica melted, sediments would pour off land masses and cliffs would crumble, triggering underwater landslides that would break open more hydrate reserves on the sea-bed. Again there would be a jump in global warming. "These are key issues that we will have to investigate over the next few years," he said.

There is also a danger of earthquakes, triggered by disintegrating glaciers, causing tsunamis off Chile, New Zealand and Newfoundland in Canada, Nasa scientist Tony Song will tell the conference. The last on this list could even send a tsunami across the Atlantic, one that might reach British shores.

Global Warming - Just One Damned Thing After Another!
Posted by The Mound of Sound at 6:26 AM

The UK has a lot to be worried about. I wonder if the London floodgates would hold under a tsunami, doubt it.

It would be nice if our government would tell us what is in store for Canada. Are the B.C. wildfires and the stormy summer in the Great Lakes region indicators of what is to come?

I experienced a near tornado several years ago in southwestern Ontario and I've never forgotten it. The force of the rain was so strong, water was being forced through the concrete block walls of the basement.

The Brits are already planning a new set of Thames floodgates but I've never read they would be capable of handling something like a tsunami.

I too want the government to tell us what's coming. I've written my MP and Iggy as well requesting just that. My MP, a Born Again Reformatory, ignored me. Iggy had his climate advisor respond,telling me that Harper is a shit. Yippee!

I grew up in Ontario back when it had four seasons. When I was a kid the idea of people golfing in February would have been taken like something from the Twilight Zone. You didn't get summer in the middle of winter. Yet, despite all these warning signs, Ontarians seem astonishingly complacent about global warming.

Fortunately Central Canada isn't expected to be hit by drought but the same can't be said for Alberta and Saskatchewan. They could really be in for it.

On this coast we have the constant worry about earthquakes. We know the Cascadia plate is ready to go and seismic events elsewhere could be enough to trigger it. When that happens, you and I will be living 15-feet nearer each other.

About a month ago I also emailed my NDP MP, asking if the NDP had plans to discuss policies to cope with coming climate change. No response. What a bunch of cowards.

LMA, it speaks volumes that these elected harlots dodge the issue entirely. They're in politics for themselves, not for the country or the Canadian people. Left, centre, right - they're all one blurry disgrace.